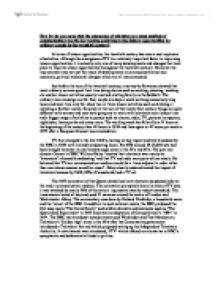 How far do you agree that the emergence of television as a mass medium of communication was the key turning point improving leisure opportunities for ordinary people in the twentieth century?

How far do you agree that the emergence of television as a mass medium of communication was the key turning point improving leisure opportunities for ordinary people in the twentieth century? In terms of leisure opportunities, the twentieth century has seen a vast explosion of activities. Although the emergence of TV is a relatively important factor in improving leisure opportunities, it is actually only one of many developments and changes that took place to improve leisure opportunities throughout the twentieth century. Moreover the improvement was not just the result of developments in communication but also economic, political and social changes which are all interconnected. Just before the turn of the twentieth century, a survey by Rowntree showed that most ordinary women spent their time doing chores such as cooking, cleaning, washing etc and her leisure activities usually involved visiting family on the Sabbath. The ordinary man would go out for five, maybe six days a week working excessively long hours and have time only for about two or three leisure activities such as drinking or watching a football match. However at the turn of the twenty first century things are quite different with women and men both going out to work with relatively more leisure time and a bigger range of activities to pursue such as cinema, radio, TV, personal computers, nightclubs, theme parks and many more. The working week has fallen from 54 hours at the beginning of the century then 48 hours in 1919 and then again to 40 hours per week in 1975 after a European Council recommendation. ...read more.

Digital provides 'cinema like' picture quality and CD sound quality with 1,100 lines, doubling the amount of information sent with each frame. The number of channels available has exceeded the targeted 500. Around 58% of the population have access to alternatives to terrestrial TV. People can now shop, send e-mail, order takeaway, gamble and book holidays through their TV. The availability of these facilities does not necessarily mean that there has been an improvement in leisure opportunities. Critics argue that this has actually led to more anti-social behaviour as people become more reluctant to leave their home and interact with other people. As a mass medium of communication, radio was first broadcast on 1922, because prior to this, it was seen as vital for military purposes. For the first time, ordinary people could listen to music; hear the news about national events in their own homes. John Reith the Director General of BBC after 1927 saw radio as not only an entertainment medium but one to improve cultural and moral standards among the public. The growth of radio increased steadily. Households owning a license in 1924 were 10%, in 1930 it was 30%, in 1933 it was 48% and in 1939 it was 71%. However many poorer ordinary working class people were excluded. The emergence of radio did not improve leisure for all ordinary people but a great deal of them. In the 1920's, listening to radio was predominantly a male hobby and an individual one. ...read more.

etc. In schools and at home, personal computers are used to reduce the time involved in researching, writing and calculating etc. In the office, computers are used for numerous activities allowing for the 9am-5pm work patterns and therefore leaving time to pursue activities in the evening and weekends. The growth of the Internet has not only opened up opportunities for leisure but has become a leisure activity in itself. Ordinary people have access to a wealth of information at their fingertips, businesses and individuals can advertise online, they can buy, sell, gamble and communicate on the World Wide Web. Ordinary people can communicate (chat), e-mail, and play games with people on the other side of the world. The growth of the Internet has been spectacular, 11.4 million homes have the Internet and 46% of the population have access to the web. An improvement in leisure opportunities therefore has not been the result of only the emergence of television but also a number of changes and developments that took place over the twentieth century. The developments have each had their own hayday and therefore been a key turning point for improving leisure opportunities for those people around at the time of the development. The improvement in leisure opportunities was actually the result of the process of change throughout the century. Each medium has had its peak and then another medium emerged to become the new 'hype', this process has continued during the century. The emergence of television was not the key turning point in improving leisure opportunities. ...read more.