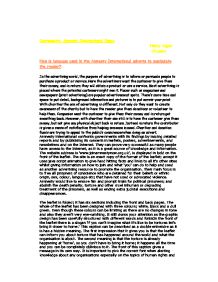 How is language used in the Amnesty International adverts to manipulate the reader?

Coursework: Amnesty International Essay Henry Agyei 10 Lowry How is language used in the Amnesty International adverts to manipulate the reader? In the advertising world, the purpose of advertising is to inform or persuade people to purchase a product or service. Here the advertisers want the customer to give them their money, and in return they will obtain a product or use a service. Most advertising is placed where the potential customers might see it. Places such as magazines and newspapers (print advertising) are popular advertisement spots. There's more time and space to put detail, background information and pictures in to put across your point. With charities the aim of advertising is different. Not only do they want to create awareness of the charity but to have the reader give them donations or volunteer to help them. Companies want the customer to give them their money and in return get something back. However, with charities their aim still is to have the customer give them money, but not give any physical object back in return. Instead in return the contributor is given a sense of satisfaction from helping someone in need. Charities and donation funds are trying to appeal to the public's consciences when doing an advert. Amnesty international confronts governments with its findings by issuing detailed reports and by publicising its concerts in leaflets, posters, advertisements, and newsletters and on the Internet. They can prove very successful as many people have access to the Internet, as it is a great source of knowledge and information. ...read more.

At the bottom of the leaflet there is a block of green colour with the name, logo and website address of Amnesty International. The logo of the candle with the barbed wire around it is renowned worldwide. Peter Benenson the fonder of Amnesty International was inspired by the Chinese proverb 'It is better to light a candle than to curse darkness.' This is symbolised by the logo, which promotes to the world that there is hope and there are people willing to help too. You open the leaflet onto two sections and your attention is immediately drawn to the right section, which has the same striking writing as the front cover and the use of the household iron as on the font cover. Accept this time the writing reads 'now imagine this was your face.' This is quite a shocking statement, which makes you sit up and pay attention. Again the key words like 'imagine' and 'face' have bigger font sizes. The word 'imagine' has been carried through to show that if this makes you stop and think, can you really imagine what it would be like to be tortured. The iron is the only image shown throughout this leaflet but it is powerful enough to have an affect on the reader by making them aware of a horrifying image before they have even read any informative sections in the leaflet. The iron again looks ghostly as its angle is portrayed to show it coming down at a great force. ...read more.

There is a lot of information, so even if you have never heard of the group you will be fully informed. It is a good that they do not use pictures of the cases that they have helped as that would be unnecessary as the description of the cases is enough to show you the horror. Also the use of the iron graphic at the start of the leaflet keeps the reader interested so in turn they read on, this is one way in which a pressure group can use propaganda to gain support, by drawing the attention of the reader. The back of the leaflet has a quick and easy summary of campaign issues of Amnesty International, this can be useful for those who may not have enough time to read the whole leaflet but want to get involved. . However the format of the leaflet has been kept the same style with colour, font and text. This can make the leaflet seem flat, bland and a bit tedious by the time you get to the end of the leaflet. Also the donation form is very big, even though it gives you various methods of payments, it does look a bit desperate as if they have focussed the attention more on the donations after giving you examples of case studies. Moreover the leaflet is very formal so it would seem that it would be suitable to an older age group. It also it is written so the language is more formal, this suggests that it would be read by an educated person ...read more.