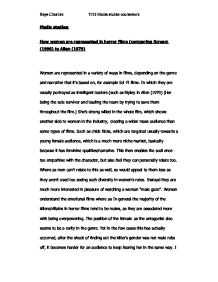 Media studies: How women are represented in horror films (comparing Scream (1996) to Alien (1979) Women are represented in a variety of ways in films, depending on the genre and narrative that it's based on, for example Sci-Fi films. In which they are usually portrayed as intelligent leaders (such as Ripley in Alien (1979) (Her being the sole survivor and leading the team by trying to save them throughout the film.) She's strong willed in the whole film, which shows another side to women in the industry, creating a wider mass audience than some types of films. Such as chick flicks, which are targeted usually towards a young female audience, which is a much more niche market, basically because it has feminine qualities/narrative. This then enables the audience too empathise with the character, but also feel they can personally relate too. Where as men can't relate to this as well, so would appeal to them less as they aren't used too seeing such diversity in women's roles. Instead they are much more interested in pleasure of watching a woman "male gaze". Women understand the emotional films where as In general the majority of the killers/villains in horror films tend to be males, as they are associated more with being overpowering. ...read more.

However even though they are portrayed as weak, the women in horrors rather than needing to be saved, they become the cause of the problem and the men need to save themselves. I did a class survey asking for people opinions whether women are represented as sexual objects and the majority (11 out of16) think that they are represented in a more sexual nature with horror films. I had many interesting and contrasting comments including one which stated "Women are never seen as equal to men in those films, there always victimised" (wood 2009). I have chosen to compare 2 films which completely contrast in views. "Scream" (1996) is a slasher horror; this is obvious because of its unidimensional structure of characters and straight forward plot line, of killings one by one, in addition to the barbarous killings of young females usually dye to the fact they have secome to some form of indulgence, such as sex. Not to mention the displacement of sexual objectification. Where as my second choice of film; "Alien" (1979) is said to be sci- fi it also contains elements of the horror and thriller genre, Based on the gory killings and language. ...read more.

Because of this, she's portraying the lead role as the saviour/ hero, and by doing so changing the conventional gender role or the male hero and damsel in distress in reverse. (Look at appendix 3 and 4 for more detailed summary). In conclusion, women have been represented in many different ways for a long time in horror films, stereotyped or not, there's always going to be an audience for both. Women's strength as characters with more intelligence/power and being antagonists are slowly but surely becoming more popular, and representing women in ways they should have always been. I think "Scream" had all the stereotypical aspects of a slasher horror, but the main character (Sydney Prescott) was strong in many ways by proving herself through out. Where as Alien, was a great film to contrast this slasher horror with, they brought a strong less feminine female character to take the lead role as the protagonist to the table. Although I was disappointed to find that originally in Alien the main character was going to be male, I think by twisting the conventions around the story line works a lot better, whilst adding a modern twist. Kaya Cheshire Yr13 Media studies coursework ...read more.