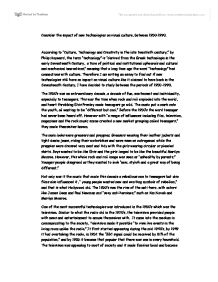 I am writing an essay to find out if new technologies still have an impact on visual culture like it claimed to have back in the Seventeenth Century. I have decided to study between the periods of 1950-1990.

Consider the impact of new technologies on visual culture, between 1950-1990. According to "Culture, Technology and Creativity in the late twentieth century," by Philip Hayward, the term "technology" is "derived from the Greek technologia in the early Seventeenth Century, a time of political and institutional upheavals and cultural and mechanical innovations," meaning that a long time ago the word "technology" had connections with culture. Therefore I am writing an essay to find out if new technologies still have an impact on visual culture like it claimed to have back in the Seventeenth Century. I have decided to study between the periods of 1950-1990. The 1950's was an extraordinary decade, a decade of fun, excitement and individuality, especially to teenagers. This was the time when rock and roll exploded into the world, and heart throbbing Elvis Presley made teenagers go wild. The music put a mark onto the youth, all wanting to be "different but cool." Before the 1950's the word teenager had never been heard off. However with "a range of influences including film, television, magazines and the rock music scene created a new market grouping called teenagers," they made themselves known. The main looks were greasers and preppies. Greasers wearing their leather jackets and tight denim jeans, riding their motorbikes and were seen as outrageous; while the preppies were dressed very neat and tidy with the girls wearing circular or pleaded skirts. ...read more.

Dating back from the 1950's, imaging was used for military defence systems. As time went on they were used for areas of architecture, production of television titles, advertisements, films and games and video. Computer imaging occurred at "a moment of history," politically and culturally, as it was because of The Cold War that there was intense pace and growth on new technological development. "The vast sums of money given over to the military for defence purposes - and later for the space race was (arguably) the most important factor in ensuring rapid developments in technology." Technology then realised its "commercial possibilities," attached to computer imaging. "...by 1963, computer generated line animation films were being produced at Bell Laboratories. And from that video games were produced. From the book "An Introduction to Cybercultures," by David Bell, "through game-playing that immersion and interactivity first became foregrounded as part of the experience of the human-computer interface." I think this quote is very much true; video game playing was the first time that ordinary people interacted with a computer. They became extremely popular with most walks of life, young children, teenagers and adults. It was a shared past-time, where friends family came together to play video games and socialize just like what the television influenced. ...read more.

In 1985 the company Microsoft introduced their "Window," programme which enabled the management of word processing and desktop publishing from the home. This became appealing to many costumers, especially businesses, because everything "could be managed from one small machine." By 1990 the world wide web or also called the internet was produced. This made a massive impact on society and culture. All people of the world could connect to one another with the click of a button, making our world a "cyberspace" world. Overall, I think there has been a powerful and forceful impact of new technologies on visual culture. As I studied through each decade, the visual culture had slightly changed from the one previous because of the new products invented made an impact on the society. We live in a "mass cultural sphere," of televisions, commercials, films, computers, games and these changes every day. Technologies change and that inevitably changes people. "Technology causes social change." As I said previously how we live in a "cyberspace world," full of machines, wires, electricity, programs, screens, connections, communications, emails, websites and chat sites. Everything in this world now always involves electricity. Over the years we have moved from using books to using bytes. New technologies have turned out the way they have because they are "social and cultural as well as technological objects." ...read more.