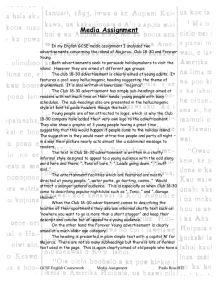 I analysed two advertisements concerning the island of Majorca; Club 18-30 and Forever Young.

Media Assignment In my English GCSE media assignment I analysed two advertisements concerning the island of Majorca; Club 18-30 and Forever Young. Both advertisements seek to persuade holidaymakers to visit the island. However they are aimed at different age groups. The club 18-30 advertisement is clearly aimed at young adults. It features a cool; wavy hallucinogenic heading suggesting the theme of drunkenness. It is also written in lowercase: "majorca" The Club 18-30 advertisement has simple sub-headings aimed at readers with not much time on their hands, young people with busy schedules. The sub-headings also are presented in the hallucinogenic style of font to guide readers though the text. ...read more.

The text in Club 18-30 advertisement is written in a chatty informal style designed to appeal to a young audience with the odd slang word here and there; "..Tons of bars..", "..Loads going down..", "..nuff said..". The entertainment facilities which are featured are mostly directed at young people; "..water parks, go-karting, casino.." Would attract a younger general audience. This is especially so when Club 18-30 come to describing popular nightclubs such as "..Tonic.." and "..Garage Heaven.". When the Club 18-30 advertisement comes to describing the location of their apartments they also use informal chatty text such as "nowhere you want to go is more than a short stagger" and keep their descriptions concise but of appeal to a young audience. ...read more.

Two pictures are displayed within the advertisement; one of a Cathedral, which again an older generation may find interesting. The other illustration is of a luxury hotel showing people relaxing beside the swimming pool. By mixing up pictures two generations are targeted for this advertisement: families and oldies. The Forever Young advertisement is written in straightforward Standard English (formal), giving the details about the holiday in clear detail form. The entertainment mentioned for the Forever Young holiday suggests sports that would appeal to older folk such as "..Golf.." and again mixing it up with a family sport "..Tennis..". There is clearly a targeting of a different audience here in respect of these two advertisements by their use of; language, pictures, fonts, headings, subheadings and colours used within the advertisements. ?? ?? ?? ?? GCSE English Coursework Media Assignment Paulo Ross B12 ...read more.