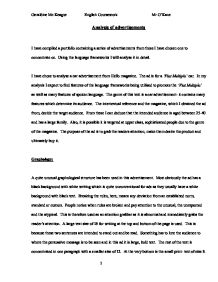 I have chose to analyse a car advertisement from Hello magazine. The ad is for a 'Fiat Multipla' car.

Analysis of advertisements I have compiled a portfolio containing a series of advertisements from these I have chosen one to concentrate on. Using the language frameworks I will analyse it in detail. I have chose to analyse a car advertisement from Hello magazine. The ad is for a 'Fiat Multipla' car. In my analysis I expect to find features of the language frameworks being utilised to promote the 'Fiat Multipla' as well as many features of spoken language. The genre of this text is a car advertisement- it contains many features which determine its audience. The intertextual reference and the magazine, which I obtained the ad from, decide the target audience. From these I can deduce that the intended audience is aged between 25-40 and has a large family. Also, it is possible it is targeted at upper class, sophisticated people due to the genre of the magazine. The purpose of the ad is to grab the readers attention, make them desire the product and ultimately buy it. Graphology: A quite unusual graphological structure has been used in this advertisement. Most obviously the ad has a black background with white writing which is quite unconventional for ads as they usually have a white background with black text. Breaking the rules, here, means any deviation from an established norm, standard or custom. People notice when rules are broken and pay attention to the unusual, the unexpected and the atypical. ...read more.

Slang is often subversive, reflecting a desire to rebel against respectability and societies conventional norms and values. In this context it suggest that the car is unconventional and contemporary. Also, the word decent conveys an informal conversational tone allowing the advertiser to relate to an up-to-the-minute audience. M.P.V. is an acronym meaning multi purpose vehicle which is used as a form of jargon as only certain people are familiar with its meaning. Jargon has also been included in the small print which is particularly common to texts of this genre. In this case the jargon refers to the specialist vocabulary associated with the particular insight of cars. It enables members of a specialist group to communicate with each other clearly. There is deliberate intention to confuse the reader as this jargon is not expected to be read by the audience, as it is only a legal requirement. A collocation has been used in the phrase a dream come true. This group of words are commonly found along side one another. Collocations are cohesive because they involve the use of words that, because of their meaning are already linked in the reader's mind. This particular collocation has positive associations with fairy tales giving the car a sense of elegance and dreaminess. The most obvious feature of this text is its informal tone which is reiterated by the use of conversational language: it's no yawn to drive. ...read more.

Audiences prefer directness, any hint of being indirect or underhand and the audience immediately stops reading the ad. The advertisement must be to the point and most importantly appear to be truthful. This will keep the readers attention. Grammatical cohesion has been maintained throughout the ad. Anaphoric reference is particularly evident with the pronouns referring back to some thing that came earlier in the sentence. Exophoric reference has also been included. The pronoun you does not refer to anyone or anything inside the text- it refers to the reader who is outside of and not mentioned in the text. The attraction of referring outside of the text is that this can leave plenty of room for manoeuvre, as it is unclear who you actually is. While this could suggest confusion, in fact there is much creative potential in not pinning down exactly who the receivers of the text actually are, because that then means that readers have to construct their own version of these figures. In this ad you could mean one particular person, anyone reading the ad or people in general. Finally, the conjunctions and, but, or are used to give the text grammatical cohesion. All of the grammatical features evident in this text are significant to the meaning of the text. The reader must feel the advertiser is talking directly to them and also the ad must be desire stimulating. Something must lure the attention of the reader and encourage them to buy the product. ...read more.