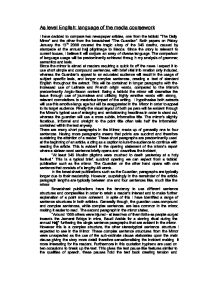 I have decided to compare two newspaper articles, one from the tabloid &quot;The Daily Mirror&quot; and the other from the broadsheet &quot;The Guardian&quot;. Both papers on Friday January the 13th 2006

As level English: language of the media coursework I have decided to compare two newspaper articles, one from the tabloid "The Daily Mirror" and the other from the broadsheet "The Guardian". Both papers on Friday January the 13th 2006 covered the tragic story of the 345 deaths, caused by stampede at the annual hajj pilgrimage to Mecca. Since the story is relevant to current issues, I believe it will conjure an array of diverse language. The comparison of language usage will be predominantly achieved through my analysis of grammar, semantics and lexis. Since the mirror is aimed at readers requiring a quick fix off the news I expect it to use short simple and compound sentences, with brief vital information only included, whereas the Guardian's appeal to an educated audience will result in the usage of subject specific lexis, and longer complex sentences, creating a text of standard English throughout the extract. This will be contained in longer paragraphs with the increased use of Latinate and French origin words, compared to the Mirror's predominantly Anglo-Saxon content. Being a tabloid the mirror will dramatise the issue through use of journalese and utilising highly emotive words with strong, relevant connotations to maximise impact of the writing. I hypothesise both extracts will use this emotive language but will be exaggerated in the Mirror in order to appeal to its target audience. ...read more.

Further more the Anglo-Saxon word dead instantly signifies the "death" of all these people giving connotations of upset and misery for millions of people around the world, hence the readers attention will be focused upon this article with the inclusion of the word death. This creates an immensely simple but powerful headline that is appealing to its readership who desires a quick fix of the news. The Guardian's headline however is in effect an extension of the title in the mirror with the inclusion of "At least" at the beginning of the sentence to detract from the certainty that there are in fact 345 dead after the horrific accident. This suggests there are in fact even more deaths unaccounted for. This produces a certain ambiguity that the typical "Guardian reader" would expect the author to expand upon in further paragraphs. Furthermore the Guardian's headline "at least 345 die in stampede at pilgrimage" retains some of the succinct features of a characteristic Daily Mirror headline to keep it succinct and informal to gain readers attention let still suggest the article contains enough information to inform and entertain the reader. For example the adaptation of the auxiliary verb in the past participle of "At least 345 have died..." has been removed to create "At least 345 die...", thus creating a fairly short punchy sentence and is more common to everyday day informal speech, eliminating any of the unnecessary words to emphasise the point for the target audience similar to the headline of the Mirror. ...read more.

This is a style that best conveys emotion and can be found in both papers. Evaluation I wasn't really surprised with either paper's content yet they both featured several characteristics of the opposing papers. Unexpectedly both papers used a lot of expert opinion as I did not expect this in the Mirror. The Guardian's whole article was far more in depth than the mirror yet the Mirror succinctly contained all relevant details than would please its readers as I predicted. This was helped through an informal approach and sensationalisation through its lexical choice. Both papers used a variety of sentence types however they largely stuck to what I predicted. However the mirror features a few complex sentences providing emotion and information contrary to my forecast. The photographic illustrations in both papers were almost identical. This was to my surprise as although it was a serious matter the guardian would normally print in black and white to create connotations of the severity and death involved within the incident whereas it is only the mirror who published the image in colour. Finally both papers' use of journalese and emotive language concludes that my hypothesis was accurate in the sense that each paper had specific language features to suit its readership however each paper would sometimes use characteristics typical to the other paper in order to entertain and inform more effectively. ...read more.