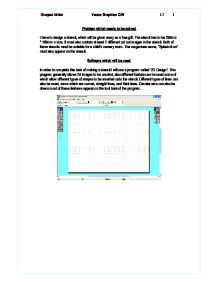 I have to design a stencil, which will be given away as a free gift. The stencil has to be 250mm * 160mm n size. It must also contain at least 2 different cut out images in the stencil. Both of these stencils must be suitable for a child's nursery room.

Problem which needs to be solved I have to design a stencil, which will be given away as a free gift. The stencil has to be 250mm * 160mm n size. It must also contain at least 2 different cut out images in the stencil. Both of these stencils must be suitable for a child's nursery room. The magazines name, "Splash-it-on" must also appear on the stencil. Software which will be used In order to complete this task of making a stencil I will use a program called "2D Design". This program generally allows 2d images to be created, also different feature can be used some of which allow different types of shapes to be inserted onto the stencil. Different types of lines can also be used, some which are curves, straight lines, and thick lines. Circular arcs can also be drawn most of these features appear on the tool bare of the program. Techniques/Hardware/Software which I will use Hardware Software Techniques Mouse 2D Design The mouse will be used for various different things. Firstly the mouse will need to be used in order to move objects and text around to their correct positions. A mouse will also be needed to guide the cursor around on the screen. This will also be needed in order to change the colour of certain shape lines and in order to fill them in with colour. ...read more.

But after searching the internet I found a site which contained simple animal pictures which I needed in my stencil, so therefore I saved these images and then inserted them into the stencil through the program which was being used to create it (2D Design). Developing of the stencil Firstly as I began to start the coursework I downloaded a few pictures from the internet which I could use in order to create pictures on my stencil. These pictures were downloaded from a site which I had found on the internet. once I had downloaded these pictures I opened the program which I was going to use in order to make the stencil, this program was called 2d design. Once I had opened it I firstly made a rectangle shape of the maximum dimensions I did this to ensure that I that stencil which I was making did not exceed the maximum size limit for the stencil. Once I had done this I filled the rectangle shape with a green colour. I did this so that any shapes which were to be images which were to be placed onto the stencil could be cut out and left as white; this would represent the empty space which appears on a stencil. Filling the rectangle with a colour In order to fill colour into the rectangle I first had to click on the rectangle with the cursor on the screen. ...read more.

Saving Work In order to keep my work safe and away from any type of danger or harm I continuously made saves to the work. In order to do this I had to click on the file button which appeared on the top tool bar and then clicked on the save button. Also to make sure that in case of a hard disk break down I saved my work in various different locations one of which was a floppy disk. In order to save my work on a floppy disk I first had to copy the file from its original location and the paste it onto the floppy disk. Evaluation My finished stencil was more or less similar to how I had designed it towards the beginning of the coursework. Although I had added more images then I said I would have, but this was done to make the stencil look more attractive, appealing and eye catching for the user. As I have done every thing which was required and done some bits extra there is no way to improve my work other than inserting more images. As I was developing the stencil I came to face a few difficulties firstly I had problems in order to find the images which I needed on the internet, as there weren't many sites which offered images in that format (.wmf). Sherjeel Akhtar Vector Graphics C/W I.T 1 ...read more.