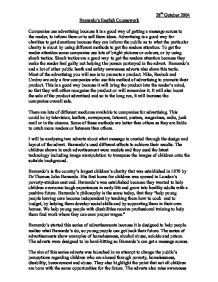 I will be analysing two adverts about what message is created through the design and layout of the advert. Barnardo's used different effects to achieve their results

28th October 2004 Barnardo's English Coursework Companies use advertising because it is a good way of getting a message across to the reader, to inform them or to sell them ideas. Advertising is a good way for charities to get donations because they can inform the public as to what the particular charity is about by using different methods to get the readers attention. To get the reader attention some companies use lots of bright pictures or colours, or by using shock tactics. Shock tactics are a good way to get the readers attention because they make the reader feel guilty not helping the person portrayed in the advert. Barnardo's and a lot of other public heath and safety awareness adverts also share this tactic. Most of the advertising you will see is to promote a product. Nike, Reebok and Umbro are only a few companies who use this method of advertising to promote their product. This is a good way because it will bring the product into the reader's mind, so that they will either recognise the product or will remember it. It will also boost the sale of the product advertised and so in the long run, it will increase the companies overall sale. ...read more.

These advertisements are suggesting many social concerns and attitudes in the 1990's. In the 1990's the social problems that became more common were child sexual abuse, homelessness and children affected by HIV/AIDS. Barnardo's were aware and became concerned. This is why they launched this series of adverts. The adverts, which I intend to analyse, are the one of Carl White and the one of the girl sitting on the sofa. The layout of the adverts has the children presented to shock people because they are being abused or they are abusing themselves. The picture fills up the whole page and the writing describing the picture is in small text. The one of Carl has the information in the bottom right corner where as the one of the girl has it next to her. This is because Barnardo's want the reader to see the picture first and then read the text as the picture will grab the reader's attention and make them want to read the writing. The camera angle of the girl sitting on the sofa is directly in front of her at her eye level. This creates an effect as if the girl is looking at and pleading to the public for help. ...read more.

Some people might feel upset, shocked or even unsure about the adverts. When our class were first showed this set of adverts most were shocked by them and most people gasped. In my opinion, I think that this series of adverts is successful. I think the strengths of this set of adverts are that the audience is made to feel sorry for the children in the adverts. The language used is very emotive and so the audience is made to feel guilty about not doing anything to help. Because of this the audience is much more likely to be persuaded to phone up and make a donation. The adverts attract the readers' attention because they have used many different effects including shock tactics and bright colours. I think that Barnardo's have made a good decision advertising in national newspapers because the majority of adults reading national newspapers are likely to see at least one Barnardo's adverts in the newspaper. The potential weaknesses of the adverts are that they are hard-hitting and some of the public may not agree with the way in which they are advertising especially if younger children were to see it. If they were to see the adverts, most children wouldn't understand them and possibly feel emotionally shocked by it. By Chris Corbett 11BM ...read more.