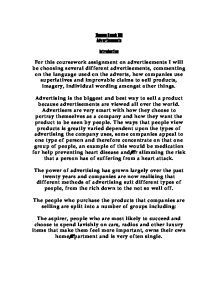 I will be choosing several different advertisements, commenting on the language used on the adverts, how companies use superlatives and improvable claims to sell products, imagery, individual wording amongst other things.

Thomas Beech 10H Advertisements Introduction For this coursework assignment on advertisements I will be choosing several different advertisements, commenting on the language used on the adverts, how companies use superlatives and improvable claims to sell products, imagery, individual wording amongst other things. Advertising is the biggest and best way to sell a product because advertisements are viewed all over the world. Advertisers are very smart with how they choose to portray themselves as a company and how they want the product to be seen by people. The ways that people view products is greatly varied dependent upon the types of advertising the company uses, some companies appeal to one type of person and therefore concentrate on that one group of people, an example of this would be medication for help preventing heart disease and/or slimming the risk that a person has of suffering from a heart attack. The power of advertising has grown largely over the past twenty years and companies are now realising that different methods of advertising suit different types of people, from the rich down to the not so well off. The people who purchase the products that companies are selling are split into a number of groups including: The aspirer, people who are most likely to succeed and choose to spend lavishly on cars, radios and other luxury items that make them feel more important, owns their own home/apartment and is very often single. -And- The mainstreamer who is seen as a normal everyday person who often has children and is married, chooses how to spend money wisely and either owns or rents their home, mainstreamers also often drive family cars. Imagery is also one of the main parts of advertising which is used often in an attempt to make people see products differently and sometimes make people more eager to buy a product, for example ferrero rocher is portrayed in it's advertisements as being the chocolates eaten by the rich and famous meaning that the company can not ...read more.

I particularly like this advert because it is advertising a product that could help a lot of people to avoid heart disease and heart problems in their lives. The advertisers have used clever wording throughout the text which gives the idea that all men aged 45 and older being at risk of heart disease/problems, The headline which is boldly noticeable to all who look at the page is a rhetorical question which makes the reader take notice of what the product is used for, while reading the text the reader is addressed personally with the use of the words "you" and "your", this informal approach to advertising is not used often but when a company decides to write an advertisement in an informal style of writing it is very effective, this type of text makes many readers believe that the company is writing to them personally and this can effectively be the factor that makes people choose to buy the product over another rival product. The company also has decided to place their web address and contact number at the foot of the advertisement as a precaution for anyone who is not sure about the product has any questions that they want answered about their own personal risk of having heart disease or any signs to show whether they personally have a heart problem. In this advertisement the use of colour is very important in all advertisements and can be used to show many different things, in this advertisement the advertisers have used the colour red to show danger in the main heading, they have used red because this colour will immediately linked with danger by a reader and the words "HEART ATTACK" in particular that are written in red so they catch a readers attention. In the text the advertisers use statistics to scare the reader and repeat the word "risk" twice in the opening paragraph to inevitably force the scared reader to read on about the possible risk level that they personally ...read more.