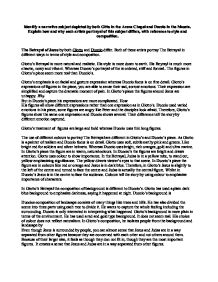 Identify a narrative subject depicted by both Gitto in the Arena Chapel and Duccio in the Maseta.

Identify a narrative subject depicted by both Gitto in the Arena Chapel and Duccio in the Maseta. Explain how and why each artists portrayal of this subject differs, with reference to style and composition. The Betrayal of Jesus by both Giotto and Duccio differ. Both of these artists portray The Betrayal in different ways in terms of style and composition. Giotto's Betrayal is more natural and realistic. His style is more down to earth. His Beyrayl is much more chaotic, noisy and viloent. Whereas Duccio's portrayal of the is ordered, stiff and formal.. The figures in Giotto's piece seem more real than Duccio's. Giotto's emphasis is on facial and gesture expression whereas Duccio focus is on fine detail. Giotto's expressions of figures in the piece, you are able to sense their sad, sorrow emotions. Their expression are simplified and capture the dramatic moment of pain. In Giotto's piece the figures around Jesus are unhappy. Why But in Duccio's piece his expressions are more complicated. How His figures all show different expressions rather than one expression as in Giotto's. Duccio used varied emotions in his piece, some figures are angry like Peter and the disciples look afraid. Therefore, Giotto's figures show the same one expression and Duccio shows several. Their difference tell the story by different emotion captured. Giotto's treatment of figures are large and bold whereas Duccio uses thin long figures. The use of different colours to portray The Betrayal are different in Giotto's and Duccio's piece. As Giotto is a painter of realism and Duccio focus is on detail. Giotto uses soft, subtle earthy pink and greens. Like bright red for soldiers and silver helmets. Whereas Duccio uses bright, rich oranges, gold and ultra marine. In Giotto's piece the figure are in warm, natural colours. In Duccio's the figures are bright and draws attention. Giotto uses colour to show importance. In the Betrayal, Judas is in a yellow robe, to stand out, yellow emphasizing significance. ...read more.

Lorenzetti captures both interior and exterior space in this painting. It seems as though the painting was painted from outside. The action is inside but you also see the outside of this building, like The figures are isolated from the building as they are in one group and the action is close by. However, the building is large and figures are placed only in the front and none at the back, using only a small amount of interior space. The figures do not seen to 'socialize' with the building and seem isolated. The figures are nearly half the size of the interior space, which is what a lot of 14th century artist like Giotto do. Lorezentti's depiction of interior space uses foreshadow in 15th century painting. The vanishing point is behind the central figure (man with cone hat). He is in the absolute middle. From the triangle tip at the top, a vertical line runs down this figure, being the absolute middle, like the painting The arrangement of poles that disappears in to vanishing point creates a sense of interior space. The foreshadow the darkness behind the central pillar creates a sense of length. Because of the pole darkness it makes the building look bigger and further back, like The dark patterns on the floor tiles act as transversal line from Alberti's theories of perspective. The black foreshadow leads the eye further back creating a sense of space. The archway is stacked behind each other depicting that the building is of complexity. The burgundy walls are dark, therefore it makes the building seem further away from the figures than it looks. Because the arcs at the top are cut off, it seems the painting has more height. We do not see the full extent of the building. Shadowing is used to make the building much larger that it is. This is the effect15th century artist uses to create a sense of depth or space. ...read more.

Between different media such as TV, magazine or internet, advertising differs. For instance, a magazine ad will heavily rely on techniques like emotive language or syntax like minor sentences whilst a TV ad depend visuals such as a celebrity. TV ads combines sight, sound emotion and adds appeal and excitement to a product. It's a good chance for a company to 'brand image' such slogans like Loreal's " because your worth it". Therefore TV (visual) ads purely depends on visuals and sound rather than language itself and the product is promoted through what the viewer sees not read. In static magazine ads language is a primary factor, and has to inform so much to lead customers to buy. To an extent magazine can provide more info such as lipstick shades. To an extent, people may tend to purchase a particular product provided the right info is provided. Cosmetic advertising really is a materialistic way of leading people to believe that happiness is achieved by purchasing products. It is argued that advertising creates a consumer culture in which buying exciting new products become the foundation of society values pleasures and goal. In this case, the demand on such cosmetics products leads manufacturers to produce new products and advertising it in certain way, as well as getting smarter with language. The fact is that we as consumers should learn to accept the fact they what we see in the media is exaggerated and not always real. In this case, cosmetic companies are portraying an desired image to consumers, that tend to make us insecure want to go out and purchase their products. Flawless models is the image consumers see. Just like language, the image use see is exaggerated. I think cosmetic advertisements are too exaggerated but is made believable. A model might look younger when using a particular product, in fact it's a bit out of touch from the average persons world. In reality, it's the makeup artists expertise, hours and the perfect light that gets the model to look like that, far from what the average person will have time to do. . ...read more.