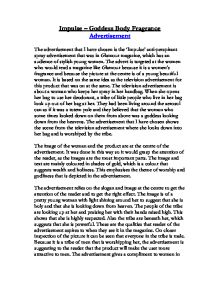 Impulse - Goddess Body Fragrance Advertisement The advertisement that I have chosen is the 'Impulse' anti-perspirant spray advertisement that was in Glamour magazine, which has an audience of stylish young women. The advert is targeted at the women who would read a magazine like Glamour because it is a women's fragrance and because the picture at the centre is of a young beautiful woman. It is based on the same idea as the television advertisement for this product that was on at the same. The television advertisement is about a woman who keeps her spray in her handbag. When she opens her bag to use her deodorant, a tribe of little people who live in her bag look up out of her bag at her. ...read more.

The advertisement relies on the slogan and image at the centre to get the attention of the reader and to get the right effect. The image is of a pretty young woman with light shining around her to suggest that she is holy and that she is looking down from heaven. The people of the tribe are looking up at her and praising her with their hands raised high. This shows that she is highly respected. Also the tribe are beneath her, which suggests that she is powerful. These are the qualities that reader of the advertisement aspires to when they see it in the magazine. On closer inspection of the picture it can be seen that everyone in the tribe is male. ...read more.

The lack of words can be good because people generally do not want to read too many words. If there were more words the reader's attention may be lost or the words may distract the attention from the image. Instead of identifying the product as just an anti-perspirant, it is called a body fragrance as well. This is a pleasant way of describing the product and gives the impression of a sweet smell and this is appealing to the reader. Overall the advertisement suggests to the reader that the user of this product will become like a goddess. This means they will be more confident, powerful and attractive. These attributes are very appealing to the target audience for this advertisement. It gives the impression of worship and adoration towards the woman in the picture and this is the type of respect the reader may aspire to. ...read more.