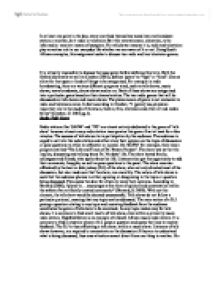 In discussing two radio and two television genres with reference to two South African examples, it is evident that the complexities and intricacies of various broadcasts and genres are not as simple as one would imagine. As seen above,

In at least one point in the day, every-one finds themselves tuned into one broadcast station or another, be it radio or television Be it for entertainment, relaxation, to be informed or merely a means of escapism. For whichever reasons it is, radio and television play an active role in our everyday life whether we are aware of it or not. Using South African examples, this assignment seeks to discuss two radio and two television genres. It is virtually impossible to discuss the issue genre before defining this term. Both the Oxford dictionary as well as Creeber (2001), defines 'genre' as "type" or "kind". Genres allow for the types or kinds of things to be categorised. For example in radio broadcasting, there are various different programs aired, such as talk shows, music shows, news broadcasts, drama shows and so on. Each of these shows are categorised into a particular genre based on their characteristics. The two radio genres that will be discussed are talk shows and music shows. The phenomenon of genre is not exclusive to radio and television alone. In fact according to Greeber, "it [genre] has played an important role in the study of literature, theatre, film, television and other art and media forms" (Creeber, G: 2001 pg.1). ...read more.

These songs which make it onto the 'top 10' or 'top 40' lists, are songs which have been voted for by the public. Jacaranda FM in contrast to the mainstream radio stations of say 5FM for example would air music of a different sub-genre, however one would still find the most popular tracks of that specific sub-genre being aired, as well as 'top 10' shows occurring. In the music genre, the D.Js primary job is to play music and possible talk a little bit about the artist of the track, rather than being an officiator or a mediator of discussion, as is found in talk radio. Television-Documentary Genre As the term documentary implies, these shows are usually fact based and require research to be done on the particular topic being showed. Events are documented by a team of researchers and aired to the public. An example of a documentary would be found in the SABC 2 show "50/50". This is a documentary program that focuses on various aspects of the wild life. Documentaries however could focus on a variety of topics, including an event, person or idea. ...read more.

It is not only the relatable characters and entertaining style of soap operas that keep the audience hooked. It is also the continuous open-ended nature of episodes, set in the present and containing a number of alternating story lines which gives the audience sense of continuous pleasure (Brown, M: 1994, pg. 58). The fact that soap operas resists narrative closure, meaning that the story is continuous and never ending, means there is always hope for the future (Anderson, M: 2004). Thus viewers will continue to watch future episodes in order to come closer to seeing what will happen at the end (which never really comes). "John Davies (1984)...suggests about soap opera viewers that once 'hooked', they vacillate between their need to know, or the pleasure of anticipation" that keeps viewers watching (Brown, M: 1994). In discussing two radio and two television genres with reference to two South African examples, it is evident that the complexities and intricacies of various broadcasts and genres are not as simple as one would imagine. As seen above, various genres and broadcasts draw in different audiences, and evoke various different responses in the viewer or listener. As technology continues to move forward, where will these broadcasts find themselves in the future? For now though, radio and television will continue to play an active part in almost all of our lives. ...read more.