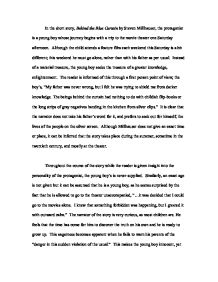 In the short story, Behind the Blue Curtain by Steven Millhauser, the protagonist is a young boy whose journey begins w

In the short story, Behind the Blue Curtain by Steven Millhauser, the protagonist is a young boy whose journey begins with a trip to the movie theater one Saturday afternoon. Although the child attends a feature film each weekend this Saturday is a bit different; this weekend he must go alone, rather than with his father as per usual. Instead of a material treasure, the young boy seeks the treasure of a greater knowledge, enlightenment. The reader is informed of this through a first person point of view; the boy's, "My father was never wrong, but I felt he was trying to shield me from darker knowledge. The beings behind the curtain had nothing to do with childish flip-books or the long strips of gray negatives handing in the kitchen from silver clips." It is clear that the narrator does not take his father's word for it, and prefers to seek out for himself, the lives of the people on the silver screen. Although Millhauser does not give an exact time or place, it can be inferred that the story takes place during the summer, sometime in the twentieth century, and mostly at the theater. Throughout the course of the story while the reader is given insight into the personality of the protagonist, the young boy's is never supplied. ...read more.

However, this female character becomes one with the narrator when he falls through her. Millhauser's emphasis on mirrors plays a crucial role in identifying the woman as the other. While there are reflections of her around the room due to the many mirrors, the woman is also a reflection of the young boy himself. While the two contradict each other on many levels, they also complete each other. When he fell through her, the young boy "transgressed a law," he sank "through melting barriers." The conflict in the story exists between remaining innocent and gaining knowledge of the world around one's self. The boy lives his life innocently, but he is ready to converge with the world of adulthood and darker knowledge. Entrance into the fantasy world behind the blue curtain allows him to do so. This transformation from innocence to knowledge requires a transformation of some sort, a spiritual death and rebirth of the boy. This death occurs when he disappears behind the blue curtain and falls asleep in the janitor's closet, and the young boy is reborn when he wakes up from this dream. The rising action begins with the young boy awaking in the bathroom and following his urge to discover out what was behind the blue curtain. ...read more.

The reader learns, through the boy's thoughts that he has gained knowledge and insight. He knew that he wanted to go, as his childish curiosity was fulfilled. Another way the theme of the transformation from childhood to adulthood is expressed is through Millhauser's motif of light. In the beginning of the novel, the amount of light gradually decreases as the young boy enters the theater. When he goes through the halls, there are candelabras, and finally, as a changed person, the young boy "stepped into the sun-flooded entranceway." Similarly imagery plays a large role in the short story. In the beginning, the young boy describes carefully, and in detail, the morning he attends the movie alone. The characters he comes across behind the curtain are also described carefully, almost as if they really exist. By reading the story, the reader also gains a greater knowledge; that everyone at some point must experience the transformation from innocence to knowledge and experience. One can learn that while this journey can start intentionally, it can also begin unexpectedly. It is easy for the reader to relate to the protagonist of the story because the events take place at the general location of the movie theater, rather than a specific location. This makes the story universal, one that many can relate to. Additionally, Behind the Blue Curtain teaches the reader the fantasy world of movies is just that, a fantasy. ?? ?? ?? ?? ...read more.