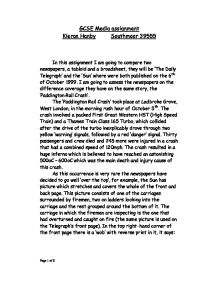 In this assignment I am going to compare two newspapers, a tabloid and a broadsheet, they will be 'The Daily Telegraph' and the 'Sun' where were both published on the 6th of October 1999.

GCSE Media assignment Kieran Hanby Southmoor 39555 In this assignment I am going to compare two newspapers, a tabloid and a broadsheet, they will be 'The Daily Telegraph' and the 'Sun' where were both published on the 6th of October 1999. I am going to assess the newspapers on the difference coverage they have on the same story, the 'Paddington Rail Crash'. The 'Paddington Rail Crash' took place at Ladbroke Grove, West London, in the morning rush hour of October 5th. The crash involved a packed First Great Western HST (High Speed Train) and a Thames Train Class 165 Turbo, which collided after the drive of the turbo inexplicably drove through two yellow 'warning' signals, followed by a red 'danger' signal. Thirty passengers and crew died and 245 more were injured in a crash that had a combined speed of 120mph. The crash resulted in a huge inferno which is believed to have reached an astonishing 500oC - 600oC which was the main death and injury cause of this crash. As this occurrence is very rare the newspapers have decided to go well 'over the top', for example, the Sun has picture which stretches and covers the whole of the front and back page. ...read more.

But, to read the paper you have to buy it. The editorial staff of the Telegraph know how this works and exploit this to encourage people to buy their newspaper! I think, out of the two papers the Sun is more effective than the Telegraph, because it is more eye-catching, this is because of the picture and the short, but effective title. Each paper has chosen to devote more pages than normal to this story, the Telegraph has devoted five broadsheet sides which is the equivalent of ten sides of tabloid size. The Sun has devoted twelve tabloid size sides to this story, which is the equivalent of approximately six sides of a broadsheet newspaper. So both papers have roughly devoted the same amount of coverage to this story. Each newspaper has chosen a look at the story from a different angle although some aspects are the same. The aspects that are the same are that each newspaper chooses to include a lot of factual evidence, also they both include a lot of interviews with many different types of people. These interviews are always no longer than ten or less sentences, with certain exceptions, for instance both newspaper have an interview with Jilly Cooper, a famous author, which takes up about half a side in the Sun and about a quarter in the Telegraph. ...read more.

Where as tabloid writers exploit the fact that their readers are of a lower intelligence therefore they will believe more fictitious stories than the same person of a higher intelligence will, for instant: " Freddie Starr ate my Hamster." That's why you get real story in the Broadsheets and the 'blown-up' one in the tabloids, because the writers exploit the intelligence of their readers, we can see this from the headline on the front: "35 FEARED DEAD" I think that the Telegraph has got the best coverage of this story. This is because, being a broadsheet, it does not give you fictitious stories therefore you get what actually happens. Also inside it is not just all pictures and no copy, it's quite the opposite. Being more copy, it will give you a more information on the happenings. Also the Telegraph has a useful and realistic graphic drawing, reconstruction of the crash before and after, giving you the exact time when it happened and what happened. Although, the Sun has its good points, but if it's the actual story you want to know, well this is not the paper! All this evidence brings me to a conclusion that, in my opinion, the Telegraph has the better coverage of the story of the 'Paddington Rail Crash'. GCSE Media Assignment Kieran Hanby Southmoor 39555 1 Page 1 of 8 ...read more.