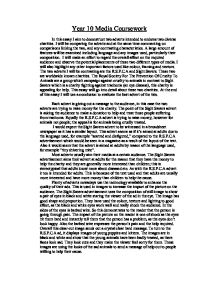 In this essay I aim to deconstruct two adverts intended to endorse two diverse charities.

Year 10 Media Coursework In this essay I aim to deconstruct two adverts intended to endorse two diverse charities. I will be comparing the adverts and at the same time commenting on comparisons linking the two, and any contrasting characteristics. A large amount of features will be examined including language and any images used, particularly their composition. I will make an effort to regard the overall affect on the required audience and observe the potential placements of these two different types of media. I will also highlight any other important factors used like colour, framing and vectors. The two adverts I will be contrasting are the R.S.P.C.A and Sight Savers. These two are worldwide known charities. The Royal Society For The Prevention Of Cruelty To Animals are a group which campaign against cruelty to animals in contrast to Sight Savers which is a charity fighting against trachoma (an eye disease), this charity is appealing for help. This essay will go into detail about these two charities. At the end of this essay I will use a conclusion to evaluate the best advert of the two. Each advert is giving out a message to the audience, in this case the two adverts are trying to raise money for the charity. The point of the Sight Savers advert is asking the audience to make a donation to help and treat those people suffering from trachoma. Equally the R.S.P.C.A advert is trying to raise money, however for animals not people; the appeal is for animals being cruelly treated. I would expect the Sight Savers advert to be witnessed in a broadsheet newspaper as it has a similar layout. ...read more.

In the top right hand corner of the page, in bold, are four bullet pointed statements summarising the aims of the R.S.P.C.A thus adding clarity and attracting the eye of those without the time to read the essay in its entirety. The Sight Savers advert uses no slogan, however it uses other important factors to attract the reader i.e. the eyes shock the reader. This advert is less effective on the reader without a slogan in the same way that the R.S.P.C.A ad doesn't use a slogan, just the typical headline. This means that the advert again is less effective on the reader. The reader isn't as attracted without a slogan, which makes the reader want to read on. This advert really requires a slogan as it lacks the cutting edge, which attracts the audience like the Sight Savers advert with the eyes and the big black bold title. The Sight Savers ad has used the headline "Blinking Hell." It is in large bold black letters and so catches the reader's attention. One might suppose that the headline fits in nicely with the black and white image. The headline's easy to read and well spread out making it easier for the reader to read. The headline relates brilliantly with the image compared to the R.S.P.C.A ad, which uses the headline "Geri's ordeal", and "Harvey's tale of terror". The headlines don't really stand out or really appeal to the reader. Without the images of the animals the advert would be boring as it would seem that the "Blinking Hell" headline would still be quite effective without the image, but the lines make you feel sorry for the animals. ...read more.

But compared to Sight Savers ad this advertisement does not use their emotive words to the effect that the Sight Savers do. The audience are shocked and have seen the effect of the disease in the Sight Savers as the image of the poor person suffering is shown. The words are more powerful, deep and emotive in the Sight Savers ad compared to the R.S.P.C.A advert which uses good emotive language which doesn't effect the audience as much due to the images the words relate to. The images aren't shocking and don't send a dominant message to the audience. Overall I would declare that the Sight Savers advert is the better of the two as it is more appealing and eye catching. The image of the eyes and the title "blinking hell" catches the reader's attention and shocks them. The vectors used by this ad are so important to the success of the appeal. This advert also contains all the necessary information including the problem and the information required for the reader get in contact with the charity. Also the adverts well spread out and has an eye-catching and professional logo, everything required for a good advert and a successful appeal. To sum up the R.S.P.C.A ad I would say that it is second best as it doesn't appeal to the reader as much as the required for a good ad and it doesn't include all the necessary information like how to contact the charity. Also the charity included no logo on the advert and also the ad doesn't have the best of layouts needed. It requires to look attractive and to include all necessary information. Unfortunately this advertisement doesn't include all this and that's why it's not the better ad out of the two and that's why I believe the ad wont be that successful. Sanjit Khera 10H ...read more.