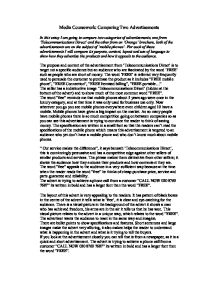 In this essay I am going to compare two categories of advertisements, one from 'Telecommunications Direct' and the other from an 'Orange' brochure, both of the advertisements are on the subject of 'mobile phones'.

Media Coursework: Comparing Two Advertisements In this essay I am going to compare two categories of advertisements, one from 'Telecommunications Direct' and the other from an 'Orange' brochure, both of the advertisements are on the subject of 'mobile phones'. For each of these advertisements I will compare its purpose, content, layout and use of language to show how they advertise the products and how it appeals to the audience. The purpose and content of the advertisement from 'Telecommunications Direct' is to target not a specific audience but an audience who are fascinated by the word 'FREE' such as people who are short of money. The word 'FREE' is referred very frequently used to persuade the customer to purchase the product as it includes "FREE mobile phone", "FREE Connection", "FREE Itemised billing", "FREE portable..." The seller has a indistinctive image 'Telecommunications Direct' (hidden at the bottom of the advert) and to show much of the most common word "FREE". The word "free" reminds me that mobile phones about 5 years ago were once in the luxury category, and at that time it was only used for business use only. Now wherever you go you see mobile phones everywhere even children aged 10 have a mobile. Mobile phones have given a big impact on the market. As so many people have mobile phones there is so much competition going on between companies so as you can see this advertisement is trying to convince the reader to think of saving money. ...read more.

The advertisement is trying to achieve maximum attraction and to do this the advertiser has mentioned the word "FREE" on every white-colour writing on black-colour boxes, as it is eye-catching to the audience. The language used in the advertisement from 'Telecommunications Direct' is very persuasive. Words used such as "FREE" is very influential to the audience, it gives an enormous impact to the readers feelings. * 132 hours standby * 4.5 hours talk time * (Under optimum conditions) * Vibra call alert * Chat messaging As shown above, the specifications of the mobile phone (Nokia 3310) are beneath the visual picture of the Nokia 3310. They are written in small and short bullet points because the information is not so much crucial for the writer as the writer knows that the word "FREE" is the most vital word in the advertisement. "25 HOURS OF FREE CALLS" and "NEVER USE YOUR HOME PHONE AGAIN!" are related together in a factual way. It is true that landline phone calls are charged at a fixed rate, to the same extent mobile phones have some free-of-charge talk time for example in this advertisement 'Telecommunications Direct' has gave us a few options such as one package which offers "200 minutes FREE CALLS *peak/off-peak monthly". I admire this type of language by the advertiser as it appeals to the audience and backs-up the advertisement. ...read more.