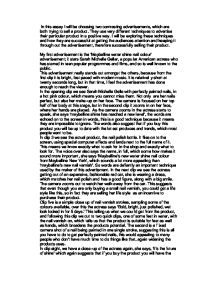 In this essay I will be choosing two contrasting advertisements, which are both trying to sell a product.

In this essay I will be choosing two contrasting advertisements, which are both trying to sell a product. They use very different techniques to advertise their particular product in a positive way. I will be exploring these techniques and how they are successful at getting the audiences attention and keeping it through out the advertisement, therefore successfully selling their product. My first advertisement is the 'Maybelline water shine nail colour' advertisement; it stars Sarah Michelle Gellar, a popular American actress who has starred in teen popular programmes and films, and so is well known to the public. This advertisement really stands out amongst the others, because from the first clip it is bright, fast paced with modern music. It is relatively short at twenty seconds long, but in that time, I feel the advertisement has done enough to reach the viewer. In the opening clip we see Sarah Michelle Gella with perfectly painted nails, in a hot pink colour, which means you cannot miss them. Not only are her nails perfect, but also her make-up on her face. The camera is focused on her top half of her body at this stage, but in the second clip it zooms in on her face, where her hands are placed. As the camera zooms in the actress starts to speak, she says 'maybelline shine has reached a new level', the words are echoed on to the screen in words, this is a good technique because it means they are impossible to ignore. ...read more.

In clip eight, we have a close-up of the actress again, she says, 'it's the future of shine' which again suggests that if you buy the product you will have the best on the market. The voice over again says the name and we have another viewing of the nail polish bottle to reminds us of what they are advertising. This advertisement ends with the happy looking actress walking along, swinging her handbag, the camera tracks to follow her movements. The voice over says the company's slogan 'maybe she's born with it, maybe its maybelline', which is well known to the public. This advertisement keeps its fast pace from start to finish with sharp, quick, descriptive sentences, along with a modern backing track which chants 'shine, shine, shine'. I think this advert is very successful as it stands out from others. It works because it is so upbeat and lively. The popular actress means that people might want to buy the product if they know she wears it. This advert was shown in the commercial break of a televised Britney Spears concert. The audience watching this would have been largely teenagers, and I think this works well to draw a teenagers attention. My second advertisement is the KFC advertisement. KFC is a well-known fast food make. The target, like the Maybelline advertisement is to sell and to make money. ...read more.

The music I think is the most important; it is what attracted me to this in the first place. It is a cooled laid back style of music, which puts you in a relaxed state of mind, and makes you think that the restaurants will be the same, relaxed and laid back. The second is captions; no voiceover is used in this advert until the very end, which I think is wise, as you do not want to be distracted from the music. Descriptive words are put on to the screen using graphics. For example; 'delicious' and 'mouth watering'. Again these are not over complicated. So, to summarise, both advertisements are trying to sell a product, but both go about it very differently. The Maybelline nail polish advert is trying to appeal to young females and so is upbeat, fast moving and is selling a celebrity life style, using Sarah Michelle Gellar. The KFC advertisement needs to appeal to everyone, and uses 'normal, every day' people and is relaxed and carefully crafted to make us think that if we purchase the product then we will be laid back too. The main techniques used in both advertisements are captions and music. Without the music the paces would not be defined and without the captions we wouldn't know what we would get from our purchase. The factor that these advertisements have in common is the fact that they are selling a life style along with their product, a different kind, but still a life style. ...read more.