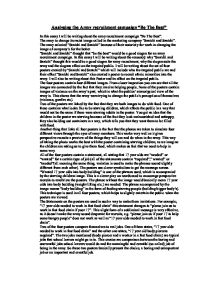 In this essay I will be writing about the army recruitment campaign &quot;Be The Best&quot;.

This sentence was probably created by Saatchi and Saatchi as a backup, used for certain people who do not get or understand the overall message the poster is trying to get across. As usual the poster contains contact numbers and "be the best" slogan accompanied by the England flag, linking the poster with others made in the past, coherent with the "be the best" campaign. Overall I believe this poster is very effective in getting across the message that the army is no longer racist. I don't quite believe this poster fits in with the slogan "be the best" as the poster's two messages for ethnic minorities is that the army is no longer racist and you will not be selling out your race if you join. The army is stating that you will be respected and you and your country will be proud of you, but the poster does not mention anything about being "better" than anything. This is congruent with quite a few of Saatchi and Saatchi's "be the best" army recruitment adverts. The adverts do work well in promoting and changing the Army's image for the better but do not fit in exactly with "be the best". I believe this because the adverts do not always compare the army to other careers or job's. ...read more.