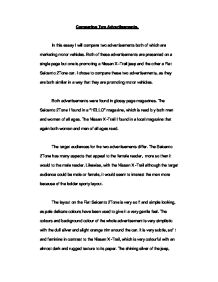 In this essay I will compare two advertisements both of which are marketing motor vehicles. Both of these advertisements are presented on a single page but one is promoting a Nissan X-Trail jeep and the other a Fiat Seicento 2Tone car.

Comparing Two Advertisements. In this essay I will compare two advertisements both of which are marketing motor vehicles. Both of these advertisements are presented on a single page but one is promoting a Nissan X-Trail jeep and the other a Fiat Seicento 2Tone car. I chose to compare these two advertisements, as they are both similar in a way that they are promoting motor vehicles. Both advertisements were found in glossy page magazines. The Seicento 2Tone I found in a "HELLO" magazine, which is read by both men and women of all ages. The Nissan X-Trail I found in a local magazine that again both woman and men of all ages read. The target audiences for the two advertisements differ. The Seicento 2Tone has many aspects that appeal to the female reader, more so then it would to the male reader. Likewise, with the Nissan X-Trail although the target audience could be male or female, it would seem to interest the men more because of the bolder sporty layout. The layout on the Fiat Seicento 2Tone is very soft and simple looking, as pale delicate colours have been used to give it a very gentle feel. The colours and background colour of the whole advertisement is very simplistic with the dull silver and slight orange trim around the car. ...read more.

Throughout the text sex appeal has been included for example, "turn a few heads" meaning catch people attention as you would with fashion and clothing. "Designed with exquisite details" almost like a designer dress that would stand out as the car would. "Metallic paint, matching interior trim and body, colour co-ordinated features" giving the gist that everything fits in and is matching like an out fit would. They then continue to say you could "look drop dead gorgeous" with a whole range of extra's just for �6199, "go on, treat yourself" as if they were talking about an item of clothing or makeup. All this would instantly attract and appeal to the female reader, whereas in the Nissan X-Trail aspects that attract the male reader to the advertisement are more male orientated features. With help of the text and language used the male "real life computer game" effect is enhanced. Short, simple sentences are used for emphasis on aspects related to the jeep. It also keeps the male readers attention as opposed to long complex sentences. It compares the car to a computer game, whereas, the Fiat car is being compared with fashion. To achieve this they used figures, mechanical and technical details, "the smooth control of a 2.5l 180hp engine with multi mode 4WD system." ...read more.

Similarly both the advertisements have motto's and logo's not just advertising the car but the company itself for anyone who is interested in buying a car if its not particularly the one shown in the advertisement. At the bottom of the Fiat Seicento 2Tone there is an extra section of text in small font giving more detail about prices and payments and buying requirements. As opposed to in the Nissan X-Trail, there are no extra details. Personally, I think that both advertisements are effective but perhaps the Fiat Seicento 2Tone is more persuasive and appealing to the reader. I think this because of its informal witty sense from the text and the use of seductive feminine language. However, I think that overall the image and sense you achieve form the Nissan X-Trail is more inviting and appealing because of its boldness and adventure. I think that in an advertisement it is more important to persuade your reader then to attract them. If the advertisement has persuaded the reader, it has more that likely already attracted them. To further extent, I would conclude in saying that it is more important to be persuaded and attracted rather then just informed. I find that the Fiat Seicento 2Tone possesses both attraction and persuasion. I believe it has a greater impact and effect on the audience so; consequently it is the most successful. ...read more.