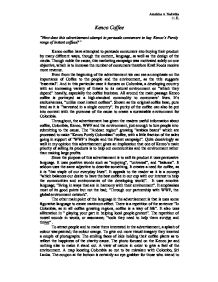 Kenco Coffee "How does this advertisement attempt to persuade consumers to buy Kenco's Purely range of instant coffees?" Kenco coffee have attempted to persuade consumers into buying their product by many different ways, though the content, language, as well as the design of the media. Though noble the cause, this marketing campaign was motivated solely on one objective, which is to increase the number of consumers therefore Kraft Foods receive more revenue. Even from the beginning of the advertisement we can see an emphasis on the importance of Coffee to the people and the environment, as the title suggests "essential". And in this particular case it focuses on Columbia, a developing country with an increasing variety of threats to its natural environment on "which they depend" heavily, especially the coffee business. All around the main passage Kenco coffee is portrayed as a high-standard commodity to consumers' lives. ...read more.

It uses positive words such as "enjoying", "universal", and "balance". It seldom uses the same adjective to describe something. It creates a need for coffee, as it is "that staple of our everyday lives". It appeals to the reader as it is a concept "which balances our desire to have the best coffee in our cup with our interest to help the communities and environments of the developing world". It uses emotive language; "living in ways that are in harmony with their environment". It emphasises most of its good points but not the bad; "Through our partnership with WWF, the global environment network". The other main point of the language in the advertisement is that is uses some figurative language to create maximum effect. There is a repetition of the sentence "In Colombia, as in all coffee growing regions, coffee is a way of life". It also uses alliteration in " playing your part in helping local people protect". ...read more.

For the gullible consumer I think yes, it is successful. But if looked closer there are a couple of points that are discouraging. The photograph of the kids can be interpreted as being child labour. Why does the coupon only valid until Sept. 30? Is it because in October rainy season starts and coffee production lowers therefore Kenco sells less? As Colombia by then is no more use to Kenco? I think that Kenya and Costa Rica should be mentioned in the advertisement more, for they too are coffee growing countries. The technicality of the coupon is a little confusing at first, notice that the font size is smaller. In the Colombia inset "cattle ranching and farms" are the causes of the clearing of the rainforest, but are not the coffee plantations a cause as well? It could be argued that it is less damaging when compared to farms and cattle ranching, but by clearing the rainforest many species may become extinct without anybody knowing hence there will be less diversification of flora. Arnoldus A. Nedwika 11 JL ...read more.