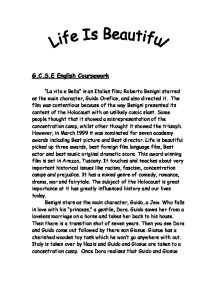 G.C.S.E English Coursework "La vita e Bella" is an Italian film; Roberto Benigni starred as the main character, Guido Orefice, and also directed it. The film was contentious because of the way Benigni presented its content of the Holocaust with an unlikely comic slant. Some people thought that it showed a misrepresentation of the concentration camp, whilst other thought it showed the triumph. However, in March 1999 it was nominated for seven academy awards including Best picture and Best director. Life is beautiful picked up three awards, best foreign film language film, Best actor and best music original dramatic score. This award winning film is set in Arezzo, Tuscany. It touches and teaches about very important historical issues like racism, fascism, concentration camps and prejudice. It has a mixed genre of comedy, romance, drama, war and fairytale. The subject of the Holocaust is great importance at it has greatly influenced history and our lives today. Benigni stars as the main character, Guido, a Jew. Who falls in love with his "princess," a gentile, Dora. ...read more.

Near the start of the film where Guido starts to fall in love with Dora he follows her to the opera. Throughout the show he spends it looking up at her. That night they spend in each others company in the pouring rain. Once inside the camp Guido gets a job as a waiter and has to change the record and finds a piece of music which was in the opera and plays it out of the window for her to her. The last of these repetitions is the funny walk that Guido does to amuse his fellow companions. There are two transition shots in the film. The first is when there is a seven year gap the other is when the train stops inside the concentration camp, this is shot between the first and second part. The first transition shot starts with Guido following Dora into the greenhouse. The camera stays still in the same frame, till Dora comes out followed by Guido then a small boy, Giosue their son is dragging his toy tank. ...read more.

The character of Guido is a comic and thoughtful. He is also gifted because ha can change the ugly truth into something funny. Benigni has a true talent to incorporate so many different genres in one film without genres in one film without being confusing. The fairly tale makes the film enchanting, works excellently when he recalls himself as a 'prince' and his wife his 'princess' he also carries her off on a white horse called 'Robin Hood'. The fairly tale genre works well because it creates a magical atmosphere and it helps Guido's and Dora's relationship develop. The repetitions work well to highlight the dreadful change between to two parts. The symbol of the tank works well as most people could relate to having there favourite toy, it becoming a reason to live is also telling as most children would pay the world for there toy come into real life. Finally overall I agree with the second point because I thought the film was enchanting, emotional and powerful, it gave me a sense of well-being and triumph at the end when Giosue says "The gift my dad gave to me was his life, so we won!" ...read more.