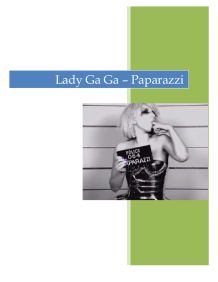 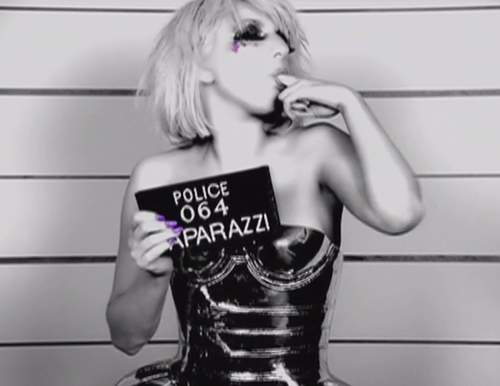 The lady ga ga music video for paparazzi is displayed as a miniature movie, featuring end credits and an introduction to the video. In the video’s introduction it has various titles and introductions giving off the feeling that it may be the starting of a movie, using an ice cold white/blue colour and an italics font, which denotes a diamond look so it looks flashy and rich. Within the first ten seconds it shows a rose with a deeper meaning of love and then goes onto the huge mansion which again shows a sense of riches, as does the overly large chandelier within the mansion. 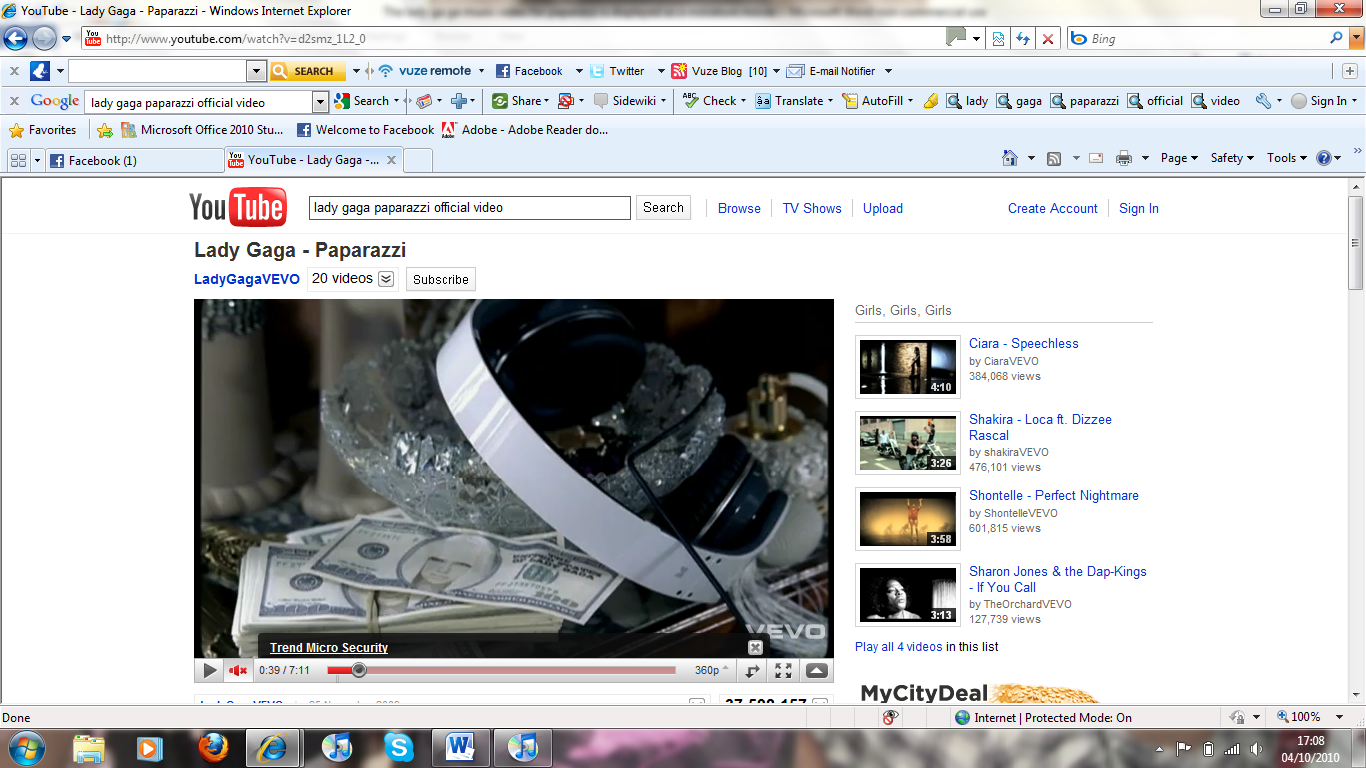 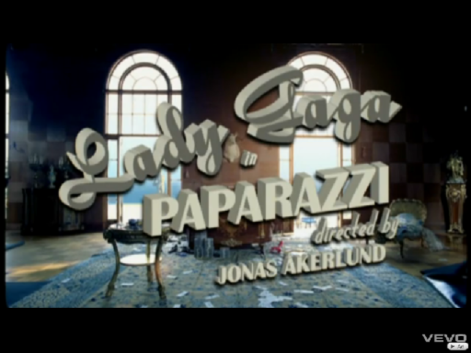 Also within the first 10 seconds it shows an extreme close up showing very little of the background of a rose which symbolises love, giving off the feeling that there is going to be some sort of love story within this musical video. On the other hand a rose could mean death also so it then creates some sort of mystery between love and death. Another signifier would be the mansion which is taken at a low angled shot to make it look a lot bigger than it is, this image denotes maybe a sense of wealth and richness within Lady Ga Ga. It then opens out to a huge chandelier and a gentle piano in the background to show some sort of elegance.

Lady Ga Ga is shown on her own dollar notes showing she is famous throughout America and it gives a hint that she is famous for her music by showing all the money everywhere and her headphones resting on a wad of dollars and jewellery. The camera continues to switch from different items such as her on front page of a newspaper, to then her face on a dollar note, maybe signifying her fame. Costume wise she is wearing a white corset kind of showing she innocent but then contrasts with her leather gloves which are black signifying she may not be all that good, and also the DIOR rings showing her wealth again. Alternatively the male has trousers on with braces showing he is some kind of rascal/hard guy.

When the couple go onto the balcony the male can see snap shots are been made by presumably the paparazzi and he makes sure he is getting in the shots so it gives the audience the knowledge to show that this is a set up.  When lady ga ga is pushed off the edge of the balcony she falls and it gives the effect she is falling into another dimension and into a completely new life, what I also picked up on is that when she falls it shows numerous camera shots and the sound of raging paparazzi in the background so she is coming back to reality and is falling into a pit of paparazzi waiting for her to land so they can take her photo. Afterwards she is seen as injured from the fall, and loss of her career. 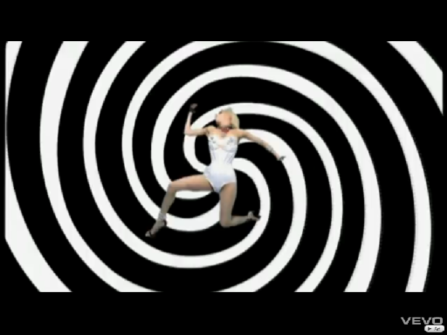 It then goes on to show a series of parallel editing of gaga on the sofa telling the story and on the other screen showing the actual story. Also it shows long shots of her in the wheelchair showing her struggle after her fall and then sudden progression of getting into crutches showing her striving to get better, the costume choice for her is like a “tin woman” effect to show she is very stiff or she is showing she is protected by a coated armour, but again she is coated in golf showing her wealth. Another story is then introduced using parallel editing again with the killing of new stars. And then shows close ups of victims creating the audience to gasp by looking at the features of the dead beautiful girls as they all seem lost and confused on why they are actually dead. The us of a high angle shot is used also on the dead girls to show a inferior look to them and to show they are much weaker. 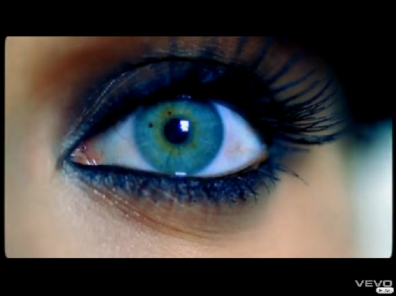 Lady gaga then creates herself into a new star with a fresh image and shows this by her new costume using a baby blue, and white as her colour giving the “new born” look. 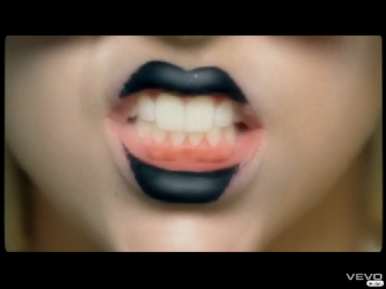 And to finish she gets back with the original male to poison him, the camera shows extreme close ups of her facial expression to get her emotions from what is happening and also mud shots to get both of the couples emotions into it. And then finalises with newspaper flashes of her come back then giving the final emphasis on the title of “paparazzi”.

This essay covers Lady GagaÃ¢â‚¬â„¢s music video for Paparazzi in quite some detail, although generally the essay excels with its descriptive information, there is somewhat less in analysis of the media techniques used and their effects. The introductory paragraph is ...

This essay covers Lady GagaÃ¢â‚¬â„¢s music video for Paparazzi in quite some detail, although generally the essay excels with its descriptive information, there is somewhat less in analysis of the media techniques used and their effects. The introductory paragraph is nice since it sets the scene well for the reader Ã¢â‚¬â€œ Ã¢â‚¬Å“The lady ga ga music video for paparazzi is displayed as a miniature movie, featuring end credits and an introduction to the videoÃ¢â‚¬Â and also introduces some good media analysis (e.g. Ã¢â‚¬Å“using an ice cold white/blue colour and an italics font, which denotes a diamond look so it looks flashy and richÃ¢â‚¬Â). Although various other sequences go on to be described, the analysis becomes less prevalent, for instance the essay later reads Ã¢â‚¬Å“Alternatively the male has trousers on with braces showing he is some kind of rascal/hard guyÃ¢â‚¬Â Ã¢â‚¬â€œ with no prior or latter explanation. Here, I would suggest the writer provides some more detail into why they believe that braces have these connotations; for example they could use an example from elsewhere to demonstrate their further knowledge of the area.

As mentioned, the level of analysis throughout is generally not of a high enough level; it is clear that the student can provide adequate analysis, however, as demonstrated through examples such as Ã¢â‚¬Å“Lady gaga then creates herself into a new star with a fresh image and shows this by her new costume using a baby blue, and white as her colour giving the Ã¢â‚¬Å“new bornÃ¢â‚¬Â lookÃ¢â‚¬Â. Here, the student provides an accurate description of an aspect of the music video, but goes on to explain how and why this denotes a particular vision to the viewer. In most areas of the essay, however, there is too much description and not enough of this further analysis. Furthermore, it would be nice to see a concluding paragraph to bring together the elements of the music video discussed and summarising the overarching media techniques and themes that are used and created, as this will not only summarise it for the reader but will demonstrate that the student has a clear understanding and opinion on the material they have covered.

Unfortunately there are a few spelling, punctuation, and grammatical errors within this essay which let it down a bit. In addition, the third paragraph in particular, provides some good points but is slightly repetitive which should definitely avoided Ã¢â‚¬â€œ each point should be covered once in sufficient detail and then moved on from (here the student seems to fixate on the image of Lady GaGa on a dollar note). It is nice to see the student has included images to support their arguments, I would recommend that these are referenced throughout the essay (e.g. there is a close up of Ã¢â‚¬Â¦. see Image 1).