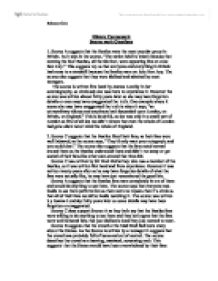 Look at the sources - Were the Beatles were the most popular group in Britain?

History Coursework Source work Questions 1. Source A suggests that the Beatles were the most popular group in Britain. As it says in the source, "The nation held its breath because that evening the four Beatles, all the fab four, were appearing live on Juke Box Jury." This suggests top us that everyone and everything in Britain had come to a standstill because the Beatles were on Juke Box Jury. The source also suggests that they were idolised and admired by most teenagers. The source is written first hand by Joanna Lumbly in her autobiography, so obviously she was there to experience it. However the source was written almost thirty years later so she may have forgotten details or even may have exaggerated the truth. One example where it seems she may have exaggerated the truth is when it says, "an extraordinary silence and emptiness had descended upon London, on Britain, on England." This is doubtful, as she was only in a small part of London so first of all she wouldn't nknow that even the whole of London had gone silent never mind the whole of England. 2. Source C suggests that the Beatles liked their fans, as their fans were well behaved, as the source says, "They'd only want your autograph; and you could chat." ...read more.

4. Source F suggests that throughout the 1960's television changed to show programmes that in those days were seen as unsuitable for all ages. Mrs Mary Whitehouse set up a campaign to stop such programmes being shown. She claimed that the programmes needed to be stopped being shown because they were influencing people badly. She campaigned against programmes such as "Coronation Street" and the play "Poor Cow" which were showing things such as sex before marriage and swearing. She also attacked the BBC for showing programmes tat were against Christian faith. Source F does suggest to us though that it was not just the BBC showing unsuitable programmes but ITV as well. Source F is part of an article that was written in the Daily Mail in 1964. The Daily Mail is likely to print such articles as it is a very conservative paper that agrees with traditional ideas and does not like change so obviously would back Mrs Whitehouse. Source G suggests that pop stars were taking drugs throughout the 1960's. Janis Joplin, a rock star, died of a drug overdose. At the time Janis Joplin died people came to the conclusion that if the Stars that the teenagers idolised were taking drugs it would influence teenagers to take them too. ...read more.

She was campaigning against the BBC and ITV to stop them showing programmes that went against the Christian Faith and influenced society badly. The article was published in the Daily Mail which is a conservative paper that also liked traditional views, and so it agreed with Mrs Whitehouse. This meant they could have slightly exaggerated the content of some programmes. In the 1960's there weren't really any bad opportunities available, although some were seen as bad at the time in the long run they are actually good. The pill and abortions became legalised and this was seen as a bad thing as many people thought that it encouraged underage sex and premarital sex. Some people saw abortion as murder and this caused a lot of upset throughout Britain. However with many people becoming more educated about sex and contraception the pill wasn't actually a bad thing. In conclusion after studying the good and bad points of how popular culture changed throughout the 1960's, I believe that the statement, "Popular culture in the 1960's did more harm than good", is incorrect be cause I do not believe it did. In the 1960's people got more opportunities than they have ever had before, the pill and abortion became available which lead to a decrease in unwanted pregnancies and television and radio began to cater for teenagers and not just adults. The 1960's was a decade of change that changed the future forever. Rebecca Gale ...read more.