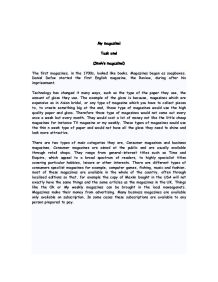 The first magazines, in the 1700s, looked like books. Magazines began as soapboxes. Daniel Defoe started the first English magazine, the Review, during after his imprisonment.

There are two types of main categories they are, Consumer magazines and business magazines. Consumer magazines are aimed at the public and are usually available through retail shops. They range from general-interest titles such as Time and  Esquire, which appeal to a broad spectrum of readers, to highly specialist titles covering particular hobbies, leisure or other interests. There are different types of consumers specilist magazines for example, computer games, fishing, music and fashion. most of these magazines are available in the whole of the country, often through localised editions so that, for example the copy of Maxim bought in the USA will not exactly have the same things and the same articles as the magazines in the UK. Things like the Ok or My weekly magazines can be brought in the local newsaganets. Magazines make their money from advertising. Many business magazines are available only available on subscription. In some cases these subscriptions are available to any person prepared to pay.

My magazine is going to be named Hunni. Hunni is all about the latest things that just came out for instance Asian celebrity gossip, Asian stars and fashion. My magazine Hunni is targeted at young Asian girls this is because we have a lot of magazine, which are targeted to all audience, but you do not have one that is just targeted at one simple audience. The people that will adversities in it would be a lot of Asian suits and saris, make-up, bags, shoes or anything to do with accessories. The magazine will come out ever other week because we want the new and fresh style and fashion for our consumers. As the magazines is to do with fashion ECT there will not be many competitions in there, however there would be one or two competitions in there for example WIN A BAG OF NO.7 MAKE UP, £30 POUNDS WORTH OF VOUCHERS TO BOOTS. I think there is a lot of space for my magazine Hunni in the market because the magazine we are looking at is all about gossip, stars and fashion. However, there are many magazines to do with these parts of topics but Hunni is based more spicily on young Asian girls. Also as the magazine will only come out ever month the magazine will be big and fat, not like the ones when you pick up read a but of the articles and then throw the magazine away. Hunni will be big and fat therefore it will have lots of thing in there that you can read, however because it will be fat, the magazine will take a long time to get though and finish everything you want to read. As the magazine is going to big and fat the magazine, the would have to be made should make the consumer think waiting for the magazine would be a worthwhile.