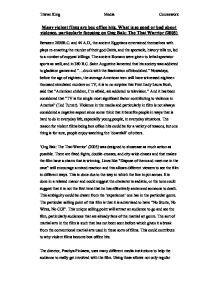 Many violent films are box office hits. What is so good or bad about violence, particularly focusing on Ong Bak: The Thai Warrior (2005)

Many violent films are box office hits. What is so good or bad about violence, particularly focusing on Ong Bak: The Thai Warrior (2005) Between 2000B.C. and 44 A.D., the ancient Egyptians entertained themselves with plays re-enacting the murder of their god Osiris, and the spectacle, history tells us, led to a number of copycat killings. The ancient Romans were given to lethal spectator sports as well, and in 380 B.C. Saint Augustine lamented that his society was addicted to gladiator games and "...drunk with the fascination of bloodshed." Nowadays, before the age of eighteen, the average American teen will have witnessed eighteen thousand simulated murders on TV, it is to no surprise that First Lady Laura Bush, said that "American children, I'm afraid, are addicted to television." And it has been considered that "TV is the single most significant factor contributing to violence in America" (Ted Turner). Violence in the media and particularly in film is not always considered a negative aspect since some think that it benefits people in ways that is hard to do in everyday life, especially young people, in everyday situations. The reason for violent films being box office hits could be for a variety of reasons, but one thing is for sure, people enjoy watching the 'downfall' of others. 'Ong Bak: The Thai Warrior' (2005) was designed to showcase as much action as possible. There are fixed fights, double-crosses, and city-wide chases and that makes the film have a charm that is winning. Lines like "Dispose of them and meet me in the cave" will encourage a mixed reaction and this allows different viewers to see the film in different ways. This is done due to the way in which the line is put across. It is done in a relaxed manor and could suggest the character is sadistic, or the tone could suggest that it is not the first time that he has effectively sentenced someone to death. ...read more.

This simplicity could lead to them enjoying it more, promoting it through word of mouth and thus accounting for the popularity of the film. There are other arguments against violence in film and one such argument is that it de-sensitises the audience to violence in general. This is called the culmination effect. According to this theory, violence in film excites children but the more they see, the more they need to excite them, this result in them becoming less shocked by real life violence. Donald Roberts, a professor at Stanford, disagrees with this and says that "...the industry insisted that viewing had little or no effect on youngsters". Having said this, the CBS (popular television channel) President, Les Moonves, says that "Anyone who thinks the media [have] nothing to do with [youth violence] is an idiot". This is a very bold statement from someone of his position and someone who has his influence is likely to be listened to and he is suggesting that violence in film does have a negative affect on society in general and thus makes it debauched. Even with all the 'evidence' against violence in film, arguments still exists to protect media violence and one of these is the argument that it is a form of free expression. It is a common view that even if all media violence was censored, it will not solve the root causes of violence in society. Deciding what is "acceptable" content is a subjective exercise and should not be done by the government but by the parents of, or the people who watch the films. Many of the films banned in the past are considered classics today. This could be because the audience has been de-sensitised to the violence over the years, however, this does not change the view that one should be offered free speech. If media violence is one such free speech, then it should be allowed. ...read more.

This leads to racism by the people who believe this and could even lead to more violence. Actor Tim Reid says that he's "...not sure black folks fully understand the power that media has in our life." He is talking about the power of indoctrination that it has. The fact that people will see violence being committed by a black person in a film and assume that that is what they are like. There is neither substantial evidence for or against the accusation that violence in film has a negative effect on its audience but there are many reported incidents that appear to have been the result of witnessing violence in film. It has been said that "...consistent exposure to stories and scenes of violence and terror can mobilize aggressive tendencies, desensitise some, isolate others, intimidate many and trigger violent action in a few." (George Gerbner, Author of Terror in the Mass Media) On top of this, it can help some through difficult times and give others confidence to act on something they felt intimidated by previously. One cannot place a label on violence in film being a good or a bad thing, but each individual person is entitled to their opinion on the matter. David Link, for example, says "What is really the issue here is the war within human nature, the conflicts between what we know to be the law and what we feel". This suggests that some people watching media violence might not appreciate what they feel within themselves, they could be worried about there own violent feelings. However, others might have enjoyed it for what it was, a simple film with inconsequential violence. Violence affects everyone differently and could be bad for some, but good for others. It would be safe to assume that the majority felt it as a positive thing and this could account for the popularity of violent films and explain why they are commonly box office hits. ...read more.