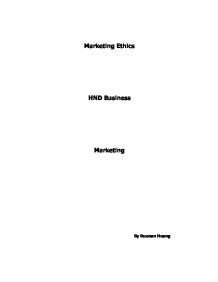 Marketing Ethics HND Business Marketing By Ruonan Huang Marketing ethics It is moral principles that define right and wrong behaviour with respect to marketing policies, practices, and systems in all areas of marketing. Marketing ethics comprises principles and standards that guide appropriate conduct in organisations. In business, ethics have two distinct aspects. First, ethics involve the situation in which controversy arises. Second, they concern the principles of behaviour or norms by which organisations are expected to accept. Advertising has always been practiced because it is so visible most people have a view on the value of advertising. Ethical issues in advertising include misleading advertising, advertising's influence on society's values and advertising to children. Here is a recent example from ASA. An advertisement, 'Tango Pipes', features a young man wrapped inside an orange-filled carpet and laid on top of several large concrete pipes. The ad shows the man rolling down a hill, crashing into a tree and then being hit by the concrete pipes resulting in the oranges exploding over him. The Advertising Standards Authority (ASA) has asked broadcasters to remove an advertisement for the soft drink 'Tango' from the TV schedules following complaints from members of the public. The ASA is investigating concerns that the advertisement may lead to emulation, by children, resulting in harm. (http://www.asa.org.uk/asa/news/news/2004/Tango+advertisement+taken+off+air.htm) Globalization is a controversial issue for businesses and governments throughout the world. It refers to the trend for markets to become worldwide in scope. As a result of globalization many businesses trade throughout the world, whereas in the past they may have focused on one country, or possibly a single continent such as Europe. Globalization is so controversial because different groups interpret it in different ways. For its opponents, globalization is a uniquely threatening world. It prompts visions of large multinationals dominating the world in pursuit of ever higher profits. Many pressure groups fear that globalization threatens the environment as well as national cultures. ...read more.

Our companies, including associated companies, employ more than 85,000 people worldwide. (http://www.bat.com/OneWeb, visited 30 Dec 2004) Tobacco companies have faced increasing criticisms for years for their stance on smoking and health and their marketing tactics. Each of the major international tobacco companies is now engaged to reinvent itself as responsible and reformed. The issue is not as straightforward as it appears at first sight. Critics may blame smoking, but tobacco is a legal product and millions of people choose to smoke, despite knowing the health risks. Even in the United States, where among some sections of society, smoking is seen as something like a social crime, millions of people smoke and would probably do so even if their government banned tobacco. So tobacco is here and will be here to stay for the foreseeable future. If British American Tobacco did not manufacture cigarettes, someone else would. This makes it particularly important that a tobacco company should manufacture, distribute and promote its products in a way that takes account of the impact on society. British American Tobacco has developed a wide-ranging CSR programme, the first tobacco company to do so. The programme sets out how the company intends to demonstrate social responsibility and outlines the systems it is putting in place to achieve this end. Critics such as Bates argue that this is a public relations exercise. The company says the programme is a genuine attempt to demonstrate that it is capable of responsible management of a risky product. British American Tobacco has made a long-term commitment to report on its social impacts and to adhere to corporate social responsibility principles. It is worth asking what the company stands to gain. If British American Tobacco can demonstrate that it has sound policies against smuggling and marketing to the under age, for example, its stock value may be re-rated and it will be able to attract capital that might otherwise go elsewhere. ...read more.

Producers would agree not to compete on price. This is the act of collusion and is banned in many countries and regions including the EU. Opponents claim that it is unethical because it restrains the consumer's freedom of choice and interferes with each firm's interest in offering high quality products at the best price. Predatory pricing refers to the situation where a firm cuts its prices with the aim of driving out the competition. Deceptive pricing occurs when consumers are misled by price deals offered by companies. Misleading price comparisons and bait and switch are two examples of deceptive pricing. Price discrimination occurs when a supplier offers a better price for the same product to a buyer resulting in an unfair competitive advantage. This can be justified when the costs of supplying different customers vary, where the price differences reflect differences in the level of competition and where different volumes are purchased. Finally product dumping involves the export of products at much lower prices than charged in the domestic market, sometimes below the cost of production. (Chapter 10, Principles & Practice of Marketing, 3rd Edition) Tobacco prices should be kept at a high level to create an incentive to stop smoking or never start. This will only be effective if prices are kept at least in line with the rise in incomes. Any price raising strategy must be accompanied by measures to enable the poor to respond to the price signals - this includes free nicotine replacement therapy on the NHS, targeted advice and information, funding for community initiatives and an active role for GPs and other primary health providers. (http://www.ash.org.uk/html/factsheets/html/basic05.html, updated Jun 2004) Reference List David Jobber, Principles & Practice of Marketing, 3rd Edition, McGraw Hill Publishing Class handouts Nestl� Baby Milk, www.babymilk.nestle.com The British American Tobacco, www.bat.com The Advertising Standard Authority website, www.asa.org.uk The International Baby Food Action Network, www.ibfan.org/english Action on Smoking and Health, www.ash.org.uk The Ethical Consumer Magazine, www.ethicalconsumer.org www.ethicalperformance.com Department of Health, www.dh.gov.uk ?? ?? ?? ?? 2 ...read more.