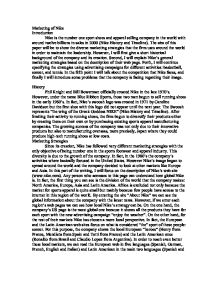 Marketing of Nike Introduction Nike is the number one sport shoes and apparel selling company in the world with around twelve billions in sales in 2000 (Nike History and Timeline). The aim of this paper will be to show the diverse marketing strategies that the firm uses around the world in order to maintain the leadership. However, I will first give a short historical background of the company and its creation. Second, I will explain Nike's general marketing strategies based on the description of their web page. Forth, I will continue specifying the strategies using advertising campaigns for different activities: basketball, soccer, and tennis. In the fifth point I will talk about the competition that Nike faces, and finally I will introduce some problems that the company is facing regarding their image. History Phil Knight and Bill Bowerman officially created Nike in the late 1970's. However, under the name Blue Ribbon Sports, those two men begun to sell running shoes in the early 1960's. In fact, Nike's swoosh logo was created in 1971 by Caroline Davidson but the first shoe with this logo did not appear until the next year. The Swoosh represents "the wing of the Greek Goddess NIKE" (Nike History and Timeline). After limiting their activity to running shoes, the firm begun to diversify their products either by creating them on their own or by purchasing existing sports apparel manufacturing companies. ...read more.

Nike Air Jordan shoe's sales grew amazingly, and in Spain for example almost one out of two young basketball players had one pair of their idol's shoes. Nike's global marketing strategy for basketball apparels was based on Michael Jordan and when he decided to leave the game for the first time the company faced a big problem. However, the brand loyalty that the consumers show at this time made the company fears decrease. Moreover Jordan came back to the game with such power that he helped the Chicago Bulls win another title. The problem was then to know how long was he going to play. In order to prepare was consider Jordan's true retirement, Nike chose to diversify its strategies. First, with Michael's help, Nike created in 1997 the Jordan Brand. Second, the company became involved in some national championships in Europe. In fact, Nike is sponsoring some of the best European teams, like Barcelona (Spain), Kinder (Italy), Pau-Orthez (France), and is also the official sponsor of the balls that are used in the Spanish Basketball Championship (ACB). However this has been a very successful strategy for the company, today's success of Nike's basketball division remains on the effects of Michael Jordan's new return to the NBA. In fact, Brand Jordan's sales were still growing while he was out of the game, and with this year's return, Nike can only be very positive about their sales. ...read more.

This global strategy made everything easier for the company and also for the consumers, because they all knew whom the two tennis players were. There were two main spots that were very similar. One was recorded in Piccadilly Circus (London) and the other one in Manhattan. This advertising campaign was very successful in part because it is known that Wimbledon (London) is the "cathedral" of tennis and because New York is the most cosmopolite city in the world where another major tennis tournament (US Open) takes place. More recently, Nike has followed a more local strategy. In fact, they have been trying to sponsor all the national champions of many countries at any age. That is why in USA, Australia, Spain and many other countries the new professional players that appear wear Nike clothes. This has made a lot of young people around the world get more familiarized with the brand. In summary, Nike's strategies might have changed but what the company has always try to do, is capture the best players in the world. In fact, they think that if they want to be considered the best sports clothes-manufacturing brand they need to have the best players working for them. Competition Nike faces a lot of competition both in the United States and in the world. In fact, there are many big competitors in the athletic footwear and apparel industry, like Reebok and Adidas. ...read more.