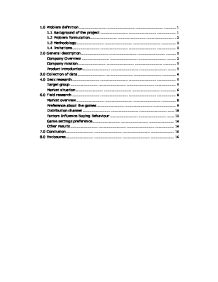 1.0 Problem definition 1 1.1 Background of the project 1 1.2 Problem formulation 2 1.3 Methodology 2 1.4 limitations 2 2.0 General description 2 Company Overview 2 Company mission 3 Product introduction 3 3.0 Collection of data 4 4.0 Desk research 5 Target group 5 Market situation 6 6.0 Field research 8 Market overview 8 Preference about the games 9 Distribution channel 10 Factors Influence Buying Behaviour 12 Game settings preference 14 Other results 14 7.0 Conclusion 16 8.0 Enclosures 16 1.0 Problem definition 1.1 Background of the project There are hundred of company games shops in Copenhagen, the distribution of goods is quite convenient, but nearly most of the game is base on the European culture, the story of the game is also base on western country's history. Now a day, many people prefer Asian culture; they prefer Asian music, the design of building and people in the game. So it will be a good time to push the Chinese game into the European stage. And the RPG game included all the issues above, it can provide old Chinese history, culture, just like bring people go around China in old time. 1.2 Problem formulation There are many good Chinese RPG game in the Asian market, and now the project focus on a survey to make sure whether should translate the game to different European langue and push to the market right now. The target group will be Customers are from age 14 - 39 years old. People in this age or studying the history in school, or know a bit of Asian, they will interest, and people from this ages play game a lot. 1.3 Methodology Marketing research (including desk and field research) is mainly applied to this project. 1.4 limitations I haven't done big amount of marketing research to support the report. That's because I am lack of time etc. Thus, the report is base on the information from questionnaires and the survey with people. ...read more.

Preference about the games War command is one type of the most popular game on the market right now, we can see from the following graph how to place different category in the market. Source: From marketing research The most popular category is war command game, like BLITZKRIEG, BLACK HAWK DOWN, and EPISODE 1: BATTLE OF NORMANDY. Some people think these games can relate to the real world, and the situation in Iraq, can raise the interest while playing these kind of game. The second category come with the RPG game, and then the Strategy game. This game is not only some simple action, it is including the story, people have to think how to solve the problem. These kind of game using the brain and takes time to play. High mind share in the market can easily lead to a bright future in this category. The market trend to this category, but it doesn't mean any RPG game get a high sales, it also depends on other facts, e.g. technology, design, and the content. Oject company pablish on net saids they are using the new technology, with the GM tools can access all the player to solve the problem on net. But up to now, there still problems with the server, they will work 7*24 hours for the server running fast. From the year 2002, there are so many internet game push into China, for the most big ones are RO and EQ. RO is placed top one and last more than a year in Korea. And EQ is the most popular European game in China. Within high pressure under there two games, Prince of Qin still are seating on a stable place, being a focus for the game news. Distribution channel In Denmark, the distribution chain can be EB game shops, big shopping centre, supper market, and electronic shops like Merlin... So I have lay out these choices for people to choose, to see where they saw the advertising and purchase games. ...read more.