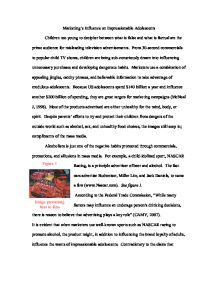 Marketing's Influence on Impressionable Adolescents Children too young to decipher between what is false and what is factual are the prime audience for misleading television advertisements. From 30-second commercials to popular child TV shows, children are being sub-consciously drawn into influencing unnecessary purchases and developing dangerous habits. Marketers use a combination of appealing jingles, catchy phrases, and believable information to take advantage of credulous adolescents. Because US adolescents spend $140 billion a year and influence another $200 billion of spending, they are great targets for marketing campaigns (McNeal J, 1998). Most of the products advertised are either unhealthy for the mind, body, or spirit. Despite parents' efforts to try and protect their children from dangers of the outside world such as alcohol, sex, and unhealthy food choices, the images still seep in; compliments of the mass media. Alcoholism is just one of the negative habits promoted through commercials, promotions, and allusions in mass media. ...read more.

While this commercial makes a bold statement about its product, it promotes false claims about sex to children too immature to know the difference between what is true and false. Another example of sex as a common theme in advertising is the commercials for women's bras by Victoria's Secret. The provocative commercials feature supermodels prancing around in skimpy lingerie to attract the attention of both sexes, even though only women consume the product. Adult commercials like Victoria's Secret aren't committing any crimes, but are drawing the premature attention of adolescent eyes. Television not only opens the eyes and ears of impressionable, sophomoric children, but also their mouths. Children spend hours upon hours sitting (more like snacking) in front of the television. Not only are the kids sedentary while watching television, but they are also constantly being bombarded with foods predominantly high in sugar and fat (American Public Health Association, 2007). ...read more.

(2) Children's wants are often favored over their needs when it comes family purchases. When was the last time a child begged his mother for some new deodorant, or a new washcloth, or some new dental floss, or a new multi-vitamin that didn't have the Flintstones picture on it? Children spend most of their time begging parents for the luxurious items they see on television. These desired products are often not necessary to sustain life or improve any aspect of it. Marketing schemes today target demographics of young and receptive viewers that will have an influence in their household's purchases. Marketers use whatever means possible to persuade and convince consumers, regardless of their age or intellect. Your paper is quite convincing, aside from Cookie Monster. You did not have to mislead the reader with the example. For example, you could have explained the new circumstances surround Cookie as further proof of your point. If you want the plus, I would like to see you try this. Otherwise, you have a well supported paper. ...read more.