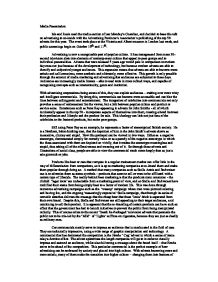 Me and Rosie read the media section of last Monday's Guardian, and decided to base this talk on advertising to co-inside with the Advertising Producer's Association's publishing of the top 50 adverts for this year.

Media Presentation Me and Rosie read the media section of last Monday's Guardian, and decided to base this talk on advertising to co-inside with the Advertising Producer's Association's publishing of the top 50 adverts for this year. The event took place at the Victoria and Albert museum in London last week, and public screenings begin on October 10th and 11th. Advertising is now a recognisable part of popular culture. It has transgressed from mere 30-second television slots into elements of contemporary culture that appeal to peer groups and to individual personalities. Adverts that were released 5 years ago would pale in comparison to modern day ones not just because of the development of technology, but because modern adverts are able to identify and subjectively target audiences. This expansion means that adverts are able to become more artistic and self-conscious, more aesthetic and ultimately, more effective. This growth is only possible through the amount of media marketing and advertising that audiences are subjected to these days. ...read more.

Products like beer or cars that compete in a regular mainstream market can offer little in the way of differentiation from competitors, so it is up to marketing companies to re-brand them and make them popular through doing so. A method that many companies such as Stella Artois and Budweiser use is to advertise them as status symbols - products that seem to sell or want to be affiliated with a certain type of lifestyle. The reality behind beer marketing is that the products main consumer - the clich�d 'lager louts' are undesirable from a marketing point of view, and so Stella and Budweiser have modified their status from being simply beer to a factor of modern life. This was done through numerous advertising campaigns such as the 'wassup' campaign where men were pictured relaxing and having fun, and the ongoing 'reassuringly expensive' Stella campaign, that through its series of comedic sketches delivers the message that the cheap beer that these 'louts' drink is separated from their own brand. ...read more.

This can make the product more appealing to different social classes. The Honda Corporation is not one usually viewed as being a feature of the high-class elite but more of a middle class car manufacturer. However if their conceptual adverts are adopted by higher culture, then the product will be too - raising the profile of the company. The actual construction of these adverts has changed also to make them even more attractive. The influence of cult television shows such as MTV has made commercials reminiscent of music videos - fast paced and designed for maximum impact in a short amount of time. The use of this is essential to the modern consumer that was raised on television only to have a low concentration threshold and high brand awareness. Ineffective adverts involve reflection and thought in order to be absorbed. Adverts like the infamous 'Gold Blend' series employ narrative devices similar to those used in soap operas, with cliffhangers and resolutions, strengthening the bond between popular culture and advertising. With television becoming so influential today, many have begun to question whether television is right in its representation of our society in adverts. ...read more.