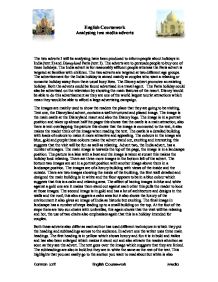 English Coursework Analysing two media adverts The two adverts I will be analysing have been produced to inform people about holidays in India (text 2) and Disneyland Paris (text 1). The adverts are to persuade people to buy one of these holidays. The India advert is for reasonably affluent people whereas the Paris advert is targeted at families with children. The two adverts are targeted at two different age groups. The advertisement for the India holiday is aimed mainly at couples who want a relaxing or romantic holiday away from there usual busy lives. The Disney advert promotes an existing holiday. Both the adverts could be found advertised in a travel agent. The Paris holiday could also be advertised on the television by showing the main features of the resort. Disney would be able to do this advertisement as they are one of the world largest tourist attractions which mean they would be able to afford a large advertising campaign. The images are mainly used to show the readers the place that they are going to be visiting. Text one, the Disneyland advert, contains a well structured and placed image. The image is the main castle at the Disneyland resort and also the Disney logo. ...read more.

At the foot of the steps there are two sun chairs with umbrellas, this again shows that the visit will be relaxing and hot, the use of two chairs also emphasises again that this is a holiday intended for couples. Both these adverts also differ as each author has used different techniques in which they put the heading and subheadings across to the audience. In advert one the writer uses three main headings. The first heading is in yellow which shows luxury and fun it is in bold and italics and has also been enlarged which makes it stand out and also attracts the readers attention as soon as they see the advert. The text goes over the image which suggests that they are linked. The subheadings are also in bold but they are in white the same as the rest of the text. This highlights that you can easily go to the section you want to read about but white is also associated with calmness and relaxing. Text two has one main heading and one side heading, the main heading says "Tell your friends..." this suggests that you should tell them this is a once in a lifetime experience and it also could portray the customers and adventurous. ...read more.

Text two uses repeated sentence structure using "tell your friends" and "tell them" this makes it more energetic and fun. Therefore the advert is similar to text one which is also informing and persuading the reader to visit Advert two contains a logo and trademark of the company and the service they provide. The logo and trademark are placed on the advert as an image it also has some text in a foreign language; the image also contains a website and the logo has been labelled onto the image. Advert one contains no logo of the company directly but the image of the castle is actually the Disney logo. It does however contain a registered name. My personal response to both these advertisement are that I think the text 2 (India) is more effective as it pulls me in with the use of images it shows me a more relaxing and peaceful time which would defiantly be more likely to draw in couples. My reactions to the Disney advert (text 1) however is not so positive although the image of the castle does draw me in I think there is too much text so it is not as effective. Therefore I would be more likely to buy a holiday in the advert for India. ?? ?? ?? ?? Kamran Latif English Coursework Media ...read more.