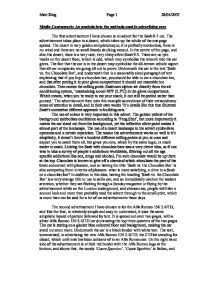 Media Coursework: An analysis into the methods used in advertising cars

Media Coursework: An analysis into the methods used in advertising cars The first advertisement I have chosen is an advert for the Saab 9-5 car. The advertisement takes place in a desert, which takes up the whole of the one page spread. The desert is very golden and picturesque; it is perfectly motionless, there is no wind and there are no small lizards skulking around. In the centre of the page, and also the desert, there is a very new, very shiny silver Saab 9-5. There are no tyre tracks on the desert floor, which is odd, which may symbolise the smooth ride the car gives. The fact that the car is in the desert may symbolise the all-terrain vehicle aspect that all car companies are going all out to prove. Underneath the car is the text 'Saab vs. the Chocolate Bar', and underneath that is a reasonably sized paragraph of text explaining that if you buy a chocolate bar, you should be able to eat a chocolate bar, and that after putting it in your glove compartment it should not resemble hot chocolate. Then comes the selling point: Saab cars siphon air directly from the air conditioning system, 'maintaining a cool 42�F (5.5�C) ...read more.

The second advertisement I have chosen is for the Alfa Romeo 156 2.4JTD, and like the first, is relatively simple and easy to understand, it uses the same simplistic layout of picture followed by text. It is spread out over two pages, with a silver Alfa Romeo 156 2.4JTD car dominating the top three-quarters of the two pages. The car is resting on a glacier blue coloured floor and background, making the car stand out even more. Underneath the car is a black border with white text. The text, summarised, is advertising the new Alfa Romeo 156 2.4JTD; the JTD bit standing for diesel, which until now has been unheard-of in an Alfa Romeo car. On the right hand side of the advertisement is a thick red border with the Alfa Romeo logo at the bottom, and above that, the words 'Cuore Sportivo'. 'Cuore Sportivo' is Italian, and translated it means 'Sporting Heart', which ties in with the image Alfa Romeo has tried hard over the years to create. This advertisement uses the same simplistic layout of picture and text used effectively by the first advert. The glacier-blue colour of the background surrounding the car makes the car both stand out, and in a way, through the reflective silver paint, blend into it's surrounding, like the Saab in the desert in the first advert. ...read more.

The use of colour, as in both the first and second advertisements, is quintessential to the success of the advertisement. The green is calm and assuring, and once again referring to 'Feng Shui', symbolises strong growth energy. The idea of strong growth energy is very effective when thought of in conjunction with the theme of parenthood displayed in the advertisement. As with all the advertisements I have chosen, the car is silver, which once again makes the car stand out as well as appearing to be part of the scenery. The scenery itself is a grassy, vegetation covered landscape, which goes on into the misty distance. It is very beautiful, and coupling that beautiful image with the family and the Volvo V70 XT, it pulls everything together into a very idyllic family holiday in a very idyllic family car. The text and the picture, and the feeling we get from seeing the picture and reading the text, is that the Volvo V70 XT is a family car, if not the family car. The text is geared very towards parents with children, and as if the advertisement knew what we were thinking when we saw and read what was on offer, at the bottom it says; 'Just because you have kids doesn't mean you can't have luxuries', which would be many a parent buyer's first thought before buying. Matt King Page 1 28/04/2007 ...read more.