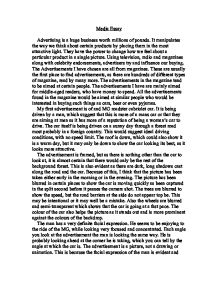 Media Essay Advertising is a huge business worth millions of pounds. It manipulates the way we think about certain products by placing them in the most attractive light. They have the power to change how we feel about a particular product in a single picture. Using television, radio and magazines along with celebrity endorsements, advertisers try and influence our buying. The Advertisements I have chosen are all from magazines. These are usually the first place to find advertisements, as there are hundreds of different types of magazine, read by many more. The advertisements in the magazine tend to be aimed at certain people. The advertisements I have are mainly aimed for middle-aged readers, who have money to spend. All the advertisements found in the magazine would be aimed at similar people who would be interested in buying such things as cars, beer or even pyjamas. My first advertisement is of and MG roadster cabriolet car. It is being driven by a man, which suggest that this is more of a mans car or that they are aiming at men as it has more of a reputation of being a woman's car to drive. ...read more.

My second advertisement is of a Cartier watch. It shows a single picture of the watch in the middle of the page, using a deep red and white background. It is the only item on the entire page, to symbolise its importance and to also show the prominence of the product itself. The advertisement is in colour, as to show the contrast between the watch and the background and to make the watch stand out. A black and white picture would therefore not work in the situation. The photograph is a clear, close-up of the item. I can tell this as the watch appears much larger than it would do in reality. This is to also immediately draw your attention to the watch and nothing else. The image has been treated to show the light glimmering off the diamonds on the watch. This is to make it appear more expensive and sophisticated and to go with the deep red background to make it appear more glamorous. It shows the watch face very clearly, so that the design and skill in producing it is a focus point. That along with the clear 'Swiss made' symbol at the bottom of the watch face. ...read more.

It is in the centre of the main focus point, making sure the reader pays most of their attention to this. The name has already been read an recited many times before the page has been turned, so there is no need for a brand name to be seen just before the reader moves on. This type of advertisement would be seen in magazines, on television and in pubs. These are the main places where this product would be accessed by the advertisers market. These would be mass-produced, being mainly the same in all the places they are featured. This type of advertisement would be aimed at anyone who is old enough to drink in a pub, and older people who prefer to have these sorts of drinks at home. The advertisements I have chosen in my essay are all very different, aimed at many types of people. They advertise for the very rich and high in social status, to every person, no matter how much money they earn or what their social status is. However, the power of advertising ensures that all of these people are affected due to the images they see. There are very few methods that have this manipulative factor. Advertising reaches everybody and so can change anything that it wants to. ...read more.