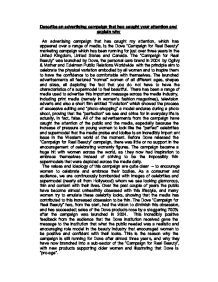 Describe an advertising campaign that has caught your attention and explain why An advertising campaign that has caught my attention, which has appeared over a range of media, is the Dove "Campaign for Real Beauty" marketing campaign which has been running for just over three years in the United Kingdom, United States and Canada. The "Campaign for Real Beauty" was launched by Dove, the personal care brand in 2004 by Ogilvy & Mather and Edelman Public Relations Worldwide with the principle aim to celebrate the physical variation embodied by all women and to inspire them to have the confidence to be comfortable with themselves. The launched advertisements all featured "normal" women of all different ages, shapes and sizes, all depicting the fact that you do not have to have the characteristics of a supermodel to feel beautiful. There has been a range of media used to advertise this important message across the media industry, including print media (namely in women's fashion magazines), television adverts and also a short film entitled "Evolution" which showed the process of excessive editing and "photo-shopping" a model endures during a photo shoot, proving that the "perfection" we see and strive for in everyday life is actually, in fact, false. ...read more.

This is the reason why the campaign is still running for Dove after almost three years, and why they have now branched into a sub-sector of the "Campaign for Real Beauty", with new products supporting older women and illustrating that Dove is "pro-age". However, the "Campaign for Real Beauty" has received many backlashes, as recent Canadian public opinion polls show that 67% of viewers find the campaign illicit, with 8 out of 10 males in the 28-45 age group finding the television ads "offensive". The campaign also frequently draws the wrong impression from those online, and in October 2005, the FCC reported several thousand complaints from viewers, however no action has ever been made to ban or forbid the advertisements on television or print media that appears in magazines and newspapers. Despite these criticisms, many groups continue to endorse the campaign, and media experts on the whole consider the campaign to be hugely successful. When flicking through a woman's magazine, coming across an advert for the Dove campaign happens frequently; often a double page spread. Also, looking online it is not difficult to find images of the print media that appears in these magazines, and I have found three that I particularly think embody a strong representation of the values of the campaign. ...read more.

However this naturalism helps the audience to relate to these women, which in turn makes the gap between the confident women they see in the image and themselves a lot smaller. All of the three images contain the Dove logo and name to give some brand recognition to the audience, however only two feature images of the actual product, and even then the image is not the focus of the advertisement. What appears to be the focus of the advertisement are in fact the women in the image, which suggests that the Dove brand realise how much of an important issue they have raised and want to continue to keep it in the lime light and in the media for as long as possible. In conclusion, the Dove "Campaign for Real Beauty" has been a media favourite for many years mainly because of their controversial take on what Dove believe to be beautiful and whom they believe their products are for. This campaign has broken the mould in the beauty industry and helped many women with self esteem issues to not only make themselves feel confident in their own skin, but also pass on this confidence to other women. ...read more.