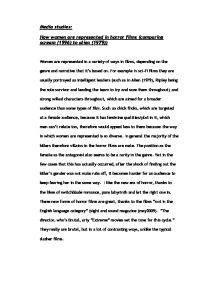 Media studies: how are women represented in horror films

Media studies: How women are represented in horror films (comparing scream (1996) to alien (1979)) Women are represented in a variety of ways in films, depending on the genre and narrative that it's based on. For example in sci-fi films they are usually portrayed as intelligent leaders (such as in Alien (1979), Ripley being the sole survivor and leading the team to try and save them throughout) and strong willed characters throughout, which are aimed for a broader audience than some types of film. Such as chick flicks, which are targeted at a female audience, because it has feminine qualities/plot in it, which men can't relate too, therefore would appeal less to them because the way in which women are represented is so diverse. In general the majority of the killers therefore villains in the horror films are male. The position as the female as the antagonist also seems to be a rarity in the genre. Yet in the few cases that this has actually occurred, after the shock of finding out the killer's gender was not male rubs off, it becomes harder for an audience to keep fearing her in the same way. I like the new era of horror, thanks to the likes of switchblade romance, pans labyrinth and let the right one in. These new forms of horror films are great, thanks to the films "not in the English language category" (sight and sound magazine (may2009). "The director, who's Brutal, arty "Extreme" movies set the tone for this cycle." ...read more.

I had many interesting and contrasting comments including what one person stated "women are never seen as equal to me in those films, there always the victims" (Wood, 2009) I have chosen to compare 2 films which completely contrast in views. "Scream" (1996) is a slasher horror; this is obvious because of its unidimensional structure of characters and straight forward plot line, of killings one by one, in addition to the barbarous killings of young females usually due to the fact they have secome to some form of indulgence, such as sex. Not to mention the displacement of sexual objectification. Where as my second choice of film; "Alien" (1979) is said to be sci-fi it also contains elements or the horror and thriller genre, because of the gory killings and language. However it doesn't use the female characters in the typical way, of victimisation, but it does let the main character Ripley (Sigourney Weaver) survives at the end. This is a trait of the horror genre, but then again you must also consider how her role was masculine anyways, which can be easily perceived by her appearance, of clothing and a shaven head. However she still remains sexually as a woman, due to her "attractive physical features" (Edwards 2009).The men show lack of respect towards her throughout, both are equally distinctly different to analyse. After watching the beginning of "Scream 1" and "2", the first thing that was noticeable was how a woman always seems to die first. ...read more.

"Alien" (1979) was his first success, due to the disappoint he felt for his first feature film "The Duellists". He wasn't originally going to direct the film, but when Carl Rinsch decided to drop out ridley Scott accepted the job. His films are varied in genre, so it's difficult to categorise and define why he chose certain aspects each. Where as scream was directed by Wes craven, who is well known for his love to create explicit, gory and very violent films. Such as nightmare on elm street, the fear, body bags and the house on the left. In my opinion in his films he liked to explore the nature of reality and test people's fears based on a twist of reality, which can be related to. Wes has a way of creating suspense in his films. In Wes Craven's scream films we find such an empowering representation of the female, through the main character (Sidney), who not only has to work out and defeat the killers, but try's to save her boyfriend. Because of this, she's portraying the lead role as the saviour/hero, and by doing so changing the conventional gender role of the male hero and damsel in distress in reverse. In conclusion, women have been represented in many different ways for a long time in horror films, stereotyped or not, there's always going to be an audience for both. Women's strength as characters with more intelligence/power and being the main antagonist is slowly but surly becoming more popular, and representing women in ways they should have always been. I think "Scream" had all the stereotypical aspects of a slasher horror, but the main character (Sidney Prescott) was strong in many ways. ...read more.