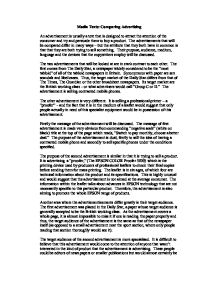 Media Texts: Comparing Advertising An advertisement is usually a text that is designed to attract the attention of the consumer and try and persuade them to buy a product. The advertisements that will be compared differ in many ways - but the attribute that they both have in common is that that they are both trying to sell something. Their purpose, audience, medium, language and the devices that the copywriters employ will be discussed. The two advertisements that will be looked at are in stark contrast to each other. The first comes from The Daily Star, a newspaper widely considered to be the "most tabloid" of all of the tabloid newspapers in Britain. Synonymous with paper are sex scandals and libel cases. Thus, the target market of the Daily Star differs from that of The Times, The Guardian or the other broadsheet newspapers. Its target market are the British working class - or what advertisers would call "Group C or D." The advertisement is selling contracted mobile phones. The other advertisement is very different. It is selling a professional printer - a "proofer" - and the fact that it is in the medium of a leaflet would suggest that only people actually in need of this specialist equipment would be in possession of this advertisement. Firstly the message of the advertisement will be discussed. ...read more.

The way that the advertisments differ with regard to audience, also affects the language and the way that they are set out, both linguistically and graphically. The first advertisement for example, is linguistically very simple. Everything said is said very simply, employing abbreviations and many contractions to make the advertisement sound more colloquial, "You'll be amazed by the huge range of offers..." or "750 mins & 6 months free." The second advertisement could not be more different. Even for someone who would consider themselves linguistically versatile, the language that the copywriter employs is of a very technical nature and unless one took an interest in the field of professional printers - or one was looking to purchase a product specifically like this, one would not understand much of the advertisement. For example, when describing the product specifications, the copywriter talks of "firmware processing speeds" and "precise levels of chromatic intensity." This sort of specialist language proves the point made above, that the language itself is completely dictated by the target market, which in this case is of specialist nature. As a direct result of the language the copywriter has chosen to employ, we can tell much about the message that he is trying to convey to the consumer. ...read more.

By talking about EPSON as if they were in fact not EPSON, it is supposed to trick the reader into thinking that it is actually someone else recommending the product to them, and not just a company advertising their own printer. Typographically, the two advertisements could not be more different. The first is heavily image based with the need for detailed descriptions eliminated by short "to-the-point" statements. The traditional product descriptions are summarised by (upper case) short phrases - for example "FREE ITEMISED BILLING" or "ONLY �13.99." The parallel pictures of the four mobile phones, directly across the middle of the page, have obviously been arranged so that the customer can compare the products easily. The second advertisement is more complicated by comparison incorporating both graphical and textual aspects. The sub heading of each section of information is in bold and various other pieces of important information are arranged similarly. The appropriate pictures accompany the text, creating a multimedia feel to the advertisement. The mixture of graphics and text give the advertisement a good structure whilst still enticing the reader's interest in the product. To conclude, two very different advertisements have been examined both aiming to fulfil the same role in a very different way. That role - as with all advertisements - is to sell a product, By incorporating different techniques that the advertisers felt would be most appropriate for the target audience both advertisements seemed to have done this well. ...read more.