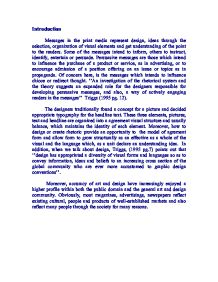 Messages in the print media represent design, ideas through the selection, organization of visual elements and get understanding of the point to the readers. Some of the messages intend to inform, others to instruct, identify, entertain or persuade.

Introduction Messages in the print media represent design, ideas through the selection, organization of visual elements and get understanding of the point to the readers. Some of the messages intend to inform, others to instruct, identify, entertain or persuade. Persuasive messages are those which intend to influence the purchase of a product or service, as in advertising, or to encourage admission of a position offering on an issue or topics as in propaganda. Of concern here, is the messages which intends to influence chioce or redirect thought. ''An investigation of the rhetorical system and the theory suggests an expanded role for the designers responsible for developing persuasive messages, and also, a way of actively engaging readers in the messages'' Triggs (1995 pg. 12). The designers traditionally found a concept for a picture and decided appropriate typography for the headline text. These three elements, pictures, text and headline are organized into a agreement visual structure and usually balance, which maintains the identity of each element. Moreover, how to design or create rhetoric provide an opportunity to the model of agrement form and allow form to grow structurally as an effective as a whole of the visual and the language which, as a unit declare an understanding idea. In addition, when we talk about design, Triggs, (1995 pg.7) points out that ''design has appropriated a diversity of visual forms and languages so as to convey information, ideas and beliefs to an increasing cross section of the global community who are ever more accustomed to graphic design conventions''. ...read more.

However, this was a separate attempt to break the chain of power relations which exercises control over public definition of the causes of poverty. Margolin and Buchanan (1996 pg. 65) state that ''The frequently repeated dependancy images of suffering that have been established as signs of the poor nations such as, the Third World, fail to represent the complexity of the problems and mask the role played in them by the wealthy nations''. This advertisement ( shown in Figure 1), which arises by the ideaology of potential donor and the way this is determined by the political and economic situation both within this country and in its relations with the Third World. Thirdly, this advertisement ( shown in Figure 1) reflect a further change in thinking and a quite different understanding of the causes of poverty. Because of, a whole series of contests and complex analyses focused on the structures of international economic relations and the social structures within countries whereby some were privileged at the expense of others. Also, this advertising drew attention to economic imbalance in the exchange of goods and services from developing countries with manufactured products of the industralized nations. This advertising identify how the unequal structures of requesting relations kept poorer countries dependent on the wealthy. This advertising was further refined by the use of class analysis within the poorer countries. ...read more.

The role traditionally assigned the designer of persuasive messages presented in the print media is one establishing an effective visual rhetoric through art direction or a representation image and selection of advertising. The rarely questioned traditional form of the message, that of a pictures, headline and texts continues to be identified as a message that attempts to sell and tell something. Certainly, application of selected concepts of rhetoric, is an effective means of determining new forms unrestricted by loyalty to conventional models; that is , ''a form which arises naturally from an argument the designer has developed as a persuasive entry point for reading the text'' Nelson (1995 pg. 49). Reference lists Henderson B. (1980), A critigue of film theory, Clark, Irwin & Company Limited, Toronto and Vancouver. Nelson G. ( 1995), The design of Modern Design, The MIT press, Cambridge, Massachusetts and London. Margolin, V. and Buchanan R. (1996), The idea of Design, Library of Congress, Cambridge. Triggs E. ( 1995), Visual Rhetoric and Semiotics. IN J. Close (Ed.), Communication Design ( pg 86), Manchester : Stretford. Triggs T. (1995), Notes on the Contributors. IN J. Close (Ed.), Communication Design (pg 7), Manchester : Stretford. Warren G. (1995), Our image of the third world. IN J. Close (Ed.), Communication design , ( pp 20-22 ), Manchester : Stretford. www.artistresource.org/forums/forum5/3_2.htm www.emporia.edu/earthsci/student/leiszer/pleist.htm - Figure 1 - Essay : Accuracy of Art : Does art reflect reality ? Student name : Pattamaporn Saengsakul Student number : E 22006 Length : 1,650 words ...read more.