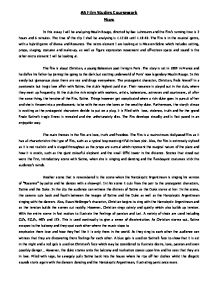 In this essay I will be analysing Moulin Rouge, directed by Baz Luhrmann and the film’s running time is 2 hours and 6 minutes. The time of the clip I shall be analysing is 1.12.00 until 1.18.40. The film is in the musical genre, with a hybrid genre of drama and Romance. The micro element I am looking at is Mise-en-Scène which includes setting, props, staging, costume and make-up, as well as figure expression movement and off-screen space and sound is the other micro element I will be looking at.

The film is about Christian, a young Bohemian poet living in Paris. The story is set in 1889 in France and he defies his father by joining the going to the dark but exciting underworld of Paris' now legendary Moulin Rouge. In this seedy but glamorous place there are sex and drugs everywhere. The protagonist character, Christian, finds himself in a passionate but tragic love affair with Satine, the club's highest paid star. Their romance is played out in the club, where they meet up frequently. At the club the rich mingle with workers, artists, bohemians, actresses and courtesans, all after the same thing, the heroine of the film, Satine. Things however get complicated when a rich duke goes in pursuit of her and she is thrown into a predicament; to be with the man she loves or the wealthy duke. Furthermore, the story’s climax is exciting as the protagonist characters decide to put on a play, it is filled with  love, violence, truth and for the grand finale Satine’s tragic illness is revealed and she unfortunately dies. The film develops steadily and is fast paced in an enjoyable way.

The main themes in the film are love, truth and freedom. The film is a main-stream Hollywood film as it has all characteristics this type of film, such as a typical boy-meets-girl-fall-in-love plot. Also, the film is extremely stylised as it is not realistic and is staged throughout as the props are surreal which represent the magical nature of the place and how it is exotic, such as the giant colourful elephant and the small Eiffel tower in the distance. Scenes that stood out were the first, introductory scene with Satine, when she is singing and dancing and the flamboyant costumes stick the audience’s minds.

Another scene that is remembered is the scene when the Narcoleptic Argentinean is singing his version of “Roxanne” by police and he dances with a show-girl. In this scene it cuts from the pair to the protagonist characters, Satine and the Duke. In the clip the audience can witness the distress of Satine as the Duke stares at her. In the scene, the camera cuts back and fourth between the images of Satine and the Duke as well as the Narcoleptic Argentinean singing with the dancers. Also, Ewan McGregor’s character, Christian begins to sing with the Narcoleptic Argentinean and as the tension builds the scenes cut rapidly. However, Christian sings calmly and quietly which also builds up tension. With the entire scene in fast motion to illustrate the feelings of passion and lust. A variety of shots are used including CU’s, ECU’s, MS’s and LS’s. This is used continually to give a sense of disorientation. As Christian storms out, Satine escapes to the balcony and they spot each other where the music stops to

emphasize there love and how they feel like it is only them in the world. As they sing to each other the audience can witness that they are discovering there feelings for each other. A blue gels is used on Satine’s face to show that it is set in the night and a red gels is used on Christian’s face which may be considered to illustrate desire, love, passion and even possibly danger… However, the duke storms onto the balcony and realisation comes upon him and he sees that they are in love. Filled with rage, he savagely pulls Satine back into the house where he rips off her clothes whilst the diegetic sounds starts again with the dancers dancing and the Narcoleptic Argentinean, illustrating panic once more.

The costume that the show-girl wears is an exotic can-can outfit which symbolises the excitement of the place and contrasts with Christians scruffy image which is portrayed though his outfit. Also the girls obvious use of make-up gives the audience a bad image of her as she looks as if she might be a trouble maker. The song in the film is used to dramatise the scene as it is a powerful song. The music is a diegetic sound as everyone can hear it and dances take place along to it. Further more, the sound illustrates the passion between the protagonist lovers and the dancer and the Narcoleptic Argentinean. In the room at the time it is rather dark, however as it is set indoors and a blue gel is used for the effect of the night coming in through the windows. The camera angles were quick and kept cutting back and fourth to illustrate the fast-paced atmosphere. Also, the audience can see Close Ups on the protagonist actors to show they are behind the scenes which give an eerie feel to show they are being watched. Plus, a lot of panning has been used to set the mood and the camera tilts a lot so the audience can once again see the faced paced atmosphere. For the finale of the scene, the Duke attacks Satine, ripping her clothes off as a man comes in and punches the Duke and one of the dancers collapse, which dramatises the scene. In the concluding moments of the scene, everyone sits down and a calm atmosphere is shown to show how everything has gone back to normal. The camera shows various shots of the room and the characters by panning and this gives a relaxed feeling.