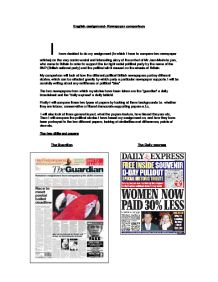 English assignment- Newspaper comparison I have decided to do my assignment (in which I have to compare two newspaper articles) on the very controversial and interesting story of the arrival of Mr Jean-Marie le pen, who came to Britain in order to support the far right racist political party by the name of the BNP (British national party) and the political stir it caused on the streets of Britain. My comparison will look at how the different political British newspapers portray different stories, which can be affected greatly by which party a particular newspaper supports. I will be carefully writing about any antitheses or political "bias" The two newspapers from which my stories have been taken are the "guardian" a daily broadsheet and the "daily express" a daily tabloid. Firstly I will compare these two types of papers by looking at there backgrounds i.e. whether they are labour, conservative or liberal democrats supporting papers e.t.c, I will also look at there general layout, what the papers feature, how biased they are etc, Then I will compare the political stories I have based my assignment on, and how they have been portrayed in the two different papers, looking at similarities and differences, points of view etc. The two different papers The Guardian The Daily express The Guardian offers a compact digest of many stories. It contains reports, features and book reviews and normally has about 3 stories on the front page, it also has 1 or 2 images on the front page and ...read more.

is dedicated in illustrating what a shambles the event was, and words like "comic book secrecy" "scuffle" and "idiots" get this over quite well, the paper obviously decided to have the anti-racist and anti-Le pen view, as we and the guardian know more members of the public are against Le-pen than members of the public with him and the BNP, so sticking with the majority will increase the guardian sales, Whether they are the true views the paper holds or whether it is just another stunt made by the guardian to draw readers in will remain unknown. The paper decided to have one very rare image of Mr Le pen on the front page looking very disorganised and upset he has a very miserable frown on his face and the image has been taken while he looks to be adjusting his glasses which again adds to the image that the guardian tries to create that the BNP and MR Le pen are a shambles that they are disorganised, incompetent and ineffective people, the guardian also has a animation on the front page of Mr le pen and the BNP leader in which the BNP leader says "thank you Mr Le pen now go back where you came from", which also adds to the idea of the whole event being a joke, but this also tries to slur the views the BNP hold that only White British born people belong in the UK. ...read more.

On the next page the Express has more detailed information about the whole event and has another 2 headlines, 3 images and 3 long columns of text. The headlines now emphasise the strong opposition the public has towards Le Pens visit with large headings reading "poison Le pen" and "crowds scream Nazi scum at racist leader", two very sharp and eye catching pictures of the demonstrations showing Le Pens car being hurled with rubbish and bin bags, and a woman screaming her head of while police try to keep control are shown to add more confirmation to the fact that "LE PEN IS A RASICT AND HE IS NOT WANTED BY THE BRITISH PUBLIC" (as far as the daily Express is concerned anyway) the paper persists with the anti Le pen idea and writes as to how many people were shocked as to the fact Le pen was allowed in the UK and that the general sectary had warned he would be arrested if he in sighted racial hatred. It is not difficult to work out the Daily Express held a particular bias towards Le Pen and decide to go down the route of the infamous motto "all for one and one for all" meaning that everyone should stick together and get this dire man out of the country and they managed to represent this idea well in the story. (Out of interest however the Daily express did not write much about the mayhem that was caused by the BNP). ...read more.