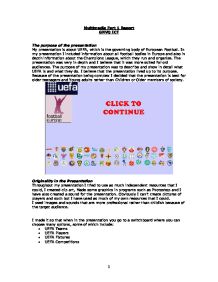 My presentation is about UEFA, which is the governing body of European Football. ICT

I used 4 sounds in my presentation. 1 is for the start of the presentation where I played the UEFA champions League theme song. The second I used was the Arsenal Football Club chant. The Third sound I used was the British national anthem, and then fourth I used was the song "Football's Coming Home". I downloaded almost all of the songs from a program called "Kazaa", this program is an Internet Shareware program. Images I used I collected from various websites and tried to use "Headshots" when it came to pictures of players. The main two websites I used for the pictures were www.fifaworldcup.com and www.uefa.com, I also used Arsenal.com and other Football Club websites for sources. The formats of images I used were ". Gif, .jpg, .bmp. I tried to import Flash into the presentation, but I was unable due to the two programs not being compatible. So instead of using the flash I took screenshots of the flash and then posted it in as an image. Explanatory notes The reasons why a presentation of this sort is better than an oral presentation is because the presentation includes images, sounds & animation which makes the presentation more appealing. By Adam Langleben, 11M 1 ...read more.