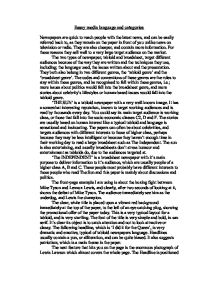 Newspapers are quick to reach people with the latest news, and can be easily referred back to, as they remain on the paper in front of you unlike news on television or radio.

Essay media language and categories Newspapers are quick to reach people with the latest news, and can be easily referred back to, as they remain on the paper in front of you unlike news on television or radio. They are also cheaper, and contain more information. For these reasons they sell well to a very large target audience on the market. The two types of newspaper, tabloid and broadsheet, target different audiences because of the way they are written and the techniques they use, including; the language used, the issues written about and the presentation. They both also belong in two different genres, the 'tabloid genre' and the 'broadsheet genre'. The codes and conventions of these genres are the rules to stay within these genres, and be recognised to fall within these genres, i.e.; more issues about politics would fall into the broadsheet genre, and more stories about celebrity's lifestyles or human-based issues would fall into the tabloid genre. 'THE SUN' is a tabloid newspaper with a very well known image. It has a somewhat interesting reputation, known to target working audiences and is read by thousands every day. You could say its main target audience is working class, or those that fall into the socio economic classes C2, D and F. The stories are usually based on human interest like a typical tabloid and language is sensational and insinuating. The papers can often be about celebrities, and targets audiences with different interests to those of higher class, perhaps because they may be less intelligent or because they haven't enough time in their working day to read a large broadsheet such as The Independent. ...read more.

Below the title sits a vibrant advertisement, telling the reader about the sports pages in this week's newspaper. This sports section however is convenient as it is the time of the World Cup, when most people would like to keep updated on the main sports events. The slogan below the title of the independent reads 'A Broader view,' and this is true as The Independent contains unbiased, practical language and usually stories related with politics. The newspaper has a formal feel, and would easily target audiences from socio economic classes A, B and C1. The newspaper contains much more information and variation of different stories. The broadsheet is always split up into 5 columns, and the pages are large and contain many stories at one time. Below the title, is a regular sized photo of Tyson on the floor, like The SUN's and the headline reads 'Floored: the Baddest Man on the Planet.' The use of capital letters obviously emphasizes certain words and catches the reader's attention. There's no play on words (puns) in the headline, and it's not biased, as it gives two views, 1 Tyson was defeated, but 2 it takes a lot to beat him as he's the best. The word 'baddest' could also be taken differently because of the mans past convictions. The story is fair, and gives two views throughout '..and it might not be to her majesty's most refined taste', 'the convicted rapist who once claimed to be the baddest man on the planet', 'Even Tyson was gracious..."Lennox was masterful'. ...read more.

There is no quote or any action written down from Tyson, apart from the fact he was 'floored'. In the Independent, there are two quotes from Tyson, and a statement telling us Lewis dedicated his win to the Queen. The language used in the SUN is sensational, dramatic and unfair, for example the caption under the photograph of the flat out Mike Tyson reads: 'Down an out...loser Tyson is left flattened, battered and bloodied.' When you watch the match Tyson could actually get up again, but this statement almost implies Tyson was fully knocked out for the count. It doesn't hesitate mentioning and emphasising 'loser' Tyson, although the audience know. The caption under the Independent's photograph of Tyson reads 'Mike Tyson is knocked out by Lennox Lewis in the eight round of the world heavyweight title fight in Memphis.' The language is practical and factual, and there are no examples of dramatic or biased language. The SUN describes the win as 'stunning victory', whereas the Independent uses 'knockout victory'. The SUN also uses the adjective 'demolition'. The Independent even tries to create sympathy for Tyson, while the SUN completely portrays him as a loser, past his time. The Independent shows that Tyson does have respect for the victory and states his quotes as proof 'Lennox was masterful...Don't worry about me, I'm a street man and I'm probably heading for oblivion.' At the same time portraying a good image of Lennox, giving some background information of his culture and appreciating the well done job he has done 'It was a brutal business....spends much of his time in his mother's native Jamaica'. ...read more.