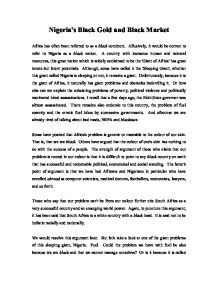 Nigeria's Black Gold and Black Market Africa has often been referred to as a black continent. Allusively, it would be correct to refer to Nigeria as a black nation. A country with immense human and mineral resources, this great nation which is widely acclaimed to be the 'Giant of Africa' has great innate but latent potentials. Although, some have called it the 'Sleeping Giant', whether this giant called Nigeria is sleeping or not, it remains a giant. Unfortunately, because it is the giant of Africa, it naturally has giant problems and obstacles bedeviling it. Or how else can we explain the subsisting problems of poverty, political violence and politically motivated hired assassinations. I recall that a few days ago, the Ekiti State governor was almost assassinated. There remains also endemic to this country, the problem of fuel scarcity and the erratic fuel hikes by successive governments. And ofcourse we are already tired of talking about bad roads, NEPA and blackouts. Some have posited that Africa's problem is genetic or traceable to the colour of our skin. That is, that we are black. ...read more.

I waited long enough to confirm the joke. I was eventually convinced about the foul play when I noticed that an attendant manned one of the pumps. On moving closer to the night attendant, I realised he had two black 50 litres gerricans into which he filled petrol. He was inspired by his greed to rebuke my presence. He demanded that If I wanted petrol, that I should move close to the office and pay to the money collector. I moved swiftly only to discover that a lot of petrol hawkers, the black marketers, were paying to this particular collector and giving or entrusting their gallons to him who in turn sent them through a middle man to the night attendant. Suddenly, a pickup patrol van quietly crawled by the station. The crowd suddenly evaporated. The gerricans immediately became orphans. The occupants of the pickup started flashing their torches in the dark to confirm their suspicion as they simultaneously disembarked their van and headed towards their attraction. These men were the Nigerian policemen. They were dressed in their black uniforms. They did the expected; dispersed, harassed, confiscated, got their tank filled for free ofcourse, got bribed and then freaked off. ...read more.

Could it be that our environment is hostile to them? We appear to have individual talents, which Nigeria's successive governments have failed to harness and encourage. In football our players are one of the most talented footballers in the world. But their talent is not collectively put to use. They have individual talents. Teamwork and team spirit is lacking. In the nation too, there is individual talent. The Nigerians we gave as examples above are people who have gone solo. If their country won't move forward, they would move forward. Teamwork and team spirit is lacking. Every thing has its spirit or its essence. The national spirit is absent in Nigeria. We are possessed by another spirit, which is self-consciousness and self-centeredness. We must cast out these societal evils and embrace a national spirit - the will to be true Nigerians. That our leaders have failed does not mean we too must fail with them. We must do two things. Have the will to collectively succeed and then pray to God to succeed. We must not only criticize our leaders (which we must do if we have to), we must also pray for them, ourselves, our nation and children. Anthony L. Esezobor works in Victoria Island, Lagos. Statistics: Words - 1,495 Characters - 7,087 Paragraphs - 13 Lines - 118 ...read more.