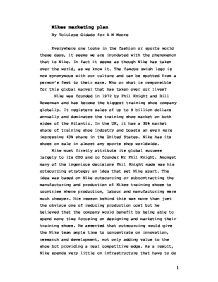 Nikes marketing plan By Tolulope Gidado for A M Moore Everywhere one looks in the fashion or sports world these days, it seems we are inundated with the phenomenon that is Nike. In fact it seems as though Nike has taken over the world, as we know it. The famous swish logo is now synonymous with our culture and can be spotted from a person's feet to their ears. Who or what is responsible for this global marvel that has taken over our lives? Nike was founded in 1972 by Phil Knight and Bill Bowerman and has become the biggest training shoe company globally. It registers sales of up to 9 billion dollars annually and dominates the training shoe market on both sides of the Atlantic. In the UK, it has a 35% market share of training shoe industry and boasts an even more impressive 43% share in the United States. Nike has its shoes on sale in almost any sports shop worldwide. ...read more.

These not only helped with the performance of the shoes but it motivated the public to purchase its shoes and gave them faith in the Nike brand. Customers were happy because they felt they were making quality purchases. Phil Knight also made sure that all aspects of his company would add value to his product so he set up a team around him that shared this zeal. Generally a company's success could depend on those who you choose to make a part of it this is where we see another part of Nikes genius shining through. Nike is so successful to day because of those who make up the Nike entity. Nike has built a culture to attract people who love sport. It did this by creating a very easygoing atmosphere and also allowing employees a relative degree of freedom. Employees have their own cafes and shops on the Nike premises. Nike believes that this kind of atmosphere produces and attracts people who are more competitive. ...read more.

Human beings are generally quite conscious on what they spend their money on usually spend on things that are beneficial to them on some level. Over the years, Nike has done a good job of emphasising how beneficial its products are by its remarkable ability to market itself. Nikes marketing campaign is based on the idea that Nike products will in some way bring fulfilment and success. The foundation of Nike marketing is the just do it slogan. With this little slogan Nike has crossed barriers that even some religions cannot conquer. This little phrase is like a global language once spoken you identify it with Nike and at the same time identify with your self. "Just do it" is an advertisement strategy that is universal and yet powerfully individual; It spoke of sports, it ignites and invited dreams, it is command to action an rejection to excuses a licence to be unconventional, daring and extraordinary. Just do it at the end of the day did something for you and in return you did something back you became loyal to the Nike brand. (www.nikebiz.com, timeline) 1 ...read more.