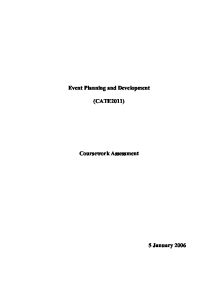 Event Planning and Development (CATE2011) Coursework Assessment 5 January 2006 Contents Page 1. Introduction 3 2. Sydney Olympic Games 2000 4 - 5 3. The Impact of the Event 6 - 7 4. Sponsorship of the Event 8 - 11 5. Strategic Marketing of the Event 11 - 13 6. Conclusion 13 References 1. Introduction The purpose of this report is to examine and critically analyse a specific event. The event which will be used in this assignment is the Sydney Olympic Games 2000. The reason for the chosen event is based on its scale. The Olympic Games are a major scale event and with the events media coverage can attract a significant amount of visitors. This report will analyse this event in terms of the following; the impact of the event, sponsorship of the event and strategic marketing of the event. 3 2. Sydney Olympic Games 2000 The Sydney Olympic Games were justifiably heralded as the "Best Olympic Games ever". They were a great sporting spectacle, enjoyed daily by hundreds of thousands of spectators and billions of TV viewers world-wide. The facilities were top class and the organisation was both impeccable and welcoming. That alone is quite something. But there was even more. Sydney's games were known as the 'Green Games'. Even Greenpeace awarded the organisers a Bronze Medal for environmental achievement and the event reinforced the International Olympic Committee's claim that environment is the third pillar of Olympism alongside sport and culture. ...read more.

dot com sponsor, and is testament to a company whose competitors' marketers have gone from spending millions on Super Bowl advertising breaks to having ample time to watch daytime television in less than a year. The company is working with the full range of Olympic participants, from the thousands of volunteers that are the backbone of the Games to top-flight athletes whose sporting career will one day come to an end, and who all need career advice and management. But why would a first-time sponsor align itself with a major sports event whose image, crucial to its commercial success, was arguably tarnished? After all, at a major 8 conference held at the University of Sydney during the 2000 games the Australian Judge Patricia O'Shane noted, in a debate on the moral health of the Olympic movement, that: "The IOC is not living up to the ideals it expects the athletes to embrace. It certainly doesn't hold moral and ethical values at the core of its business." It would appear that consumers think the same way - a nation-wide poll undertaken by Performance Research shortly after the Salt Lake City scandal broke indicated that 40% believed "Their overall impression of the Olympics has been damaged". But it seems that in the minds of most consumers there's a distinction between the IOC and the Games and the companies who sponsor them. ...read more.

"For us, the years of hard work prior to an Olympic Games have become the real cornerstone of our marketing programs, providing tangible results," Shepard says, "and then in the final months and weeks as the world focuses on the Olympic Games there's a power surge of activity that keeps us challenged and excited." Visa's preparations for the Sydney Olympics began in earnest in 1997, when it formed an exclusive Destination Marketing consortium with three premier Australian travel and tourism partners. This successful partnership has resulted in more than US$40 million in marketing value for Australia to date. (international.visa.com/av/main.jsp) One of the keys to Visa's marketing success is the focus on the Olympic host city and country, sometimes overlooked by others. When Sydney, ranked consistently as the world's most desirable tourist destination, was named host to the 2000 Olympic Games, it was natural that Visa, the world's leading payment brand, would want to connect the three great brands: the Olympic Games, Visa, and Sydney, Australia. 6. Conclusion To conclude, this report has identified what made the Olympic Games 2000 such a successful event. It has analysed the impact of the event, the strategic marketing of the event and the main sponsorship of the event. In addition, it has examined these factors in depth and found that these aspects are what made the Sydney Olympic Games 2000 unique. ...read more.