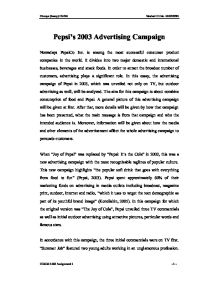 Pepsi's 2003 Advertising Campaign Nowadays PepsiCo Inc. is among the most successful consumer product companies in the world. It divides into two major domestic and international businesses, beverages and snack foods. In order to attract the broadest number of customers, advertising plays a significant role. In this essay, the advertising campaign of Pepsi in 2003, which was unveiled not only on TV, but outdoor advertising as well, will be analyzed. The aim for this campaign is about combine consumption of food and Pepsi. A general picture of this advertising campaign will be given at first. After that, more details will be given by how that campaign has been presented, what the main message is from that campaign and who the intended audience is. Moreover, information will be given about how the media and other elements of the advertisement affect the whole advertising campaign to persuade customers. When "Joy of Pepsi" was replaced by "Pepsi: It's the Cola" in 2003, this was a new advertising campaign with the most recognizable taglines of popular culture. This new campaign highlights "the popular soft drink that goes with everything from food to fun" (Pepsi, 2003). ...read more.

From the first TV advertisement, the different costumes of two people are the key symbols of this ad because it indicates that Cola is not only the drink that people thought before but that they can make beautiful food music together. Another aspect for Cola in this campaign is fun, and "Vacuum" is the best example for this. First of all, in this advertisement, Dave Chappelle who is a famous comedian represented the product and the clear symbol of fun is when the robot eats Dave's pants when Dave refuses to give his Pepsi to vacuum. As well these two advertisements, PepsiCo also emphasizes "cola occasions" with energy which is showed by "Tailgating". Because these advertisements are showed on TV, which is one of the most popular entertainments in our daily life, intended audiences for these ads could be anyone who watches TV. Audiences might be attracted by ads' contents, strange sounds or music. Moreover, since there are three different advertisements, awareness will be raised among people who have different interests or are in similar situations. Maitland (1998:8) asserts that "as an advertising medium, commercial radio offers a unique blend of characteristics to its advertisers." ...read more.