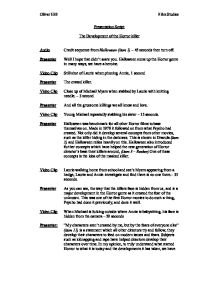 Presentation Script The Development of the Horror killer Audio Credit sequence from Halloween (item 1) - 45 seconds then turn off. Presenter Well I hope that didn't scare you. Halloween sums up the Horror genre in many ways, we have a heroine. Video Clip Still shot of Laurie when phoning Annie, 1 second Presenter The crazed killer. Video Clip Close up of Michael Myers when stabbed by Laurie with knitting needle. - 3 second Presenter And all the gruesome killings we all know and love. Video Clip Young Michael repeatedly stabbing his sister - 15 seconds. Presenter Halloween was benchmark for all other Horror films to base themselves on. Made in 1978 it followed on from what Psycho had created. Not only did it develop several concepts from other movies, such as the killer hiding in the darkness. This is shown in Dracula (item 2) and Halloween relies heavily on this. Halloween also introduced further concepts which have helped the new generation of Horror director's base their killers around, (item 3 - Reeker) One of these concepts is the idea of the masked killer. Video Clip Laurie walking home from school and see's Myers appearing from a hedge, Laurie and Annie investigate and find there is no-one there.- 35 seconds. ...read more.

Although saying this, in these times audiences would have been scared. Another reason for the developed killer is so popular is the actor playing the role. Christopher Lee was a icon back in the late 50's, mainly for playing Dracula, but now developments in the genre have led to more over the top actors playing these roles, such as Bruce Campbell "The B-Movie king" (item 7). Projector Highlighted lines showing how Bruce Campbell's role in the Evil Dead developed the B-Movie - 5 seconds. Presenter Bruce Campbell helped develop the B-Movie craze and with that the B-Movie killer, which was very popular in the 80's. We must thank him for helping in B-Movies such as The Evil Dead and Chopping Mall, two of my favourite movies of all time. The killers in these movies were vastly different from killers in the past. Without B-Movies we would be without many modern Horrors, one of these is Reeker (item 3) Video Clip Reeker killing Cookie in the outhouse - 20 seconds Presenter Produced in 2006, Reeker is a completely animated killer; basically he's a killer that can only be found by the sense of smell. Thanks to CGI, killers like this have been able to be created. ...read more.

A. Romero. George. A. Romero, one of the most successful zombie directors, created a trilogy of movies which really enhanced the zombie genre in the 80's. One of these movies was Dawn of the dead (item 4). Video Clip Stephen with his last bullet shooting himself while the zombie hordes head towards him - 30 secs Presenter This film, and also Night of the living dead, was the benchmark for all other zombie movies to follow. They took a simple concept and made it into one of the most terrifying killers today. But this is one of the downfalls of the movie, because it is so simple, many people have copied the idea of zombies but have not developed them in anyway, making them very boring for the spectator. "The zombie franchise is far from dead, this is a bad sign for reviewers like us" (item 7 Audio Credit sequence from Halloween (item 1) - Play until finished. Presenter Well, I hope you guys enjoyed the presentation and that you all learnt a couple of things. I hope you realised that the horror killer is always continuously being developed, and for that we have to thanks movies such as Halloween and Reeker. Thanks for listening and long live horror. ?? ?? ?? ?? Oliver Hill Film Studies ...read more.