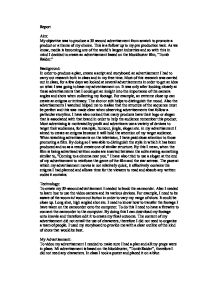 Produce a 30 second advertisement from scratch to promote a product or a theme of my choice.

Report Aim: My objective was to produce a 30 second advertisement from scratch to promote a product or a theme of my choice. This is a follow up to my pre production task. As we know, media is becoming one of the world's largest industries and so with this in mind I decided to create an advertisement based on the blockbuster film, "Tomb Raider." Background: In order to produce a plan, create a script and storyboard an advertisement I had to carry out research both in class and in my free time. Most of this research was carried out in class, for a few days we looked at several advertisements in order to get an idea on what I was going to base my advertisement on. It was only after looking closely at these advertisements that I could get an insight into the importance of the camera angles and shots when collecting my footage. For example, an extreme close up can create an enigma or intimacy. The shot or edit helps to distinguish the mood. Also the advertisements I watched helped me to realise that the structure of the sequence must be perfect and this was made clear when observing advertisements that follow a particular storyline. ...read more.

I used my storyboard to provide me with a clear outline of the kind of shots that would be best. My Advertisement: To video my advertisement I needed to make sure I had a plan and all my props were in place. Mt advertisement is based on the blockbuster, "Tomb Raider", therefore I did not need any characters. In class I took a poster and placed it on a blue background on the floor. From this I took various close up shots because the poster did not cover up a wide surface area. Also this was a low budget production and so close up shots appeared to be more effective, the background of the poster would not be appropriate. To give myself a choice when editing, I took a range of shots from different angles so I have the choice of which one would suit my advertisement most. After downloading my footage onto imovie I was able to structure it effectively using fade in/ fade out, dissolve, push etc. A lot of practice was required on imovie in order for me to apply these actions sufficiently. This helped create a linear effect to my advertisement. Not only did I just insert effective movements from one edit to another, I also inserted written codes between several edits such as, "Coming to a cinema near you." ...read more.

The footage I had taken had to be edited into approximately 8 frames. I saved the pictures frame by frame into my own file where I was able to make significant adjustments to them. I would liked to have planned a better advertisement, as I did not find the one I produced to be very challenging. Also I would like to have retaken a few shots as they did not appear to be shot perfectly. However this exercise did help me to learn from my mistakes and how to improve next time. Overleaf I have created a questionnaire to allow people to judge how effective my advertisement actually was, and in order to evaluate it effectively I asked questions concerning the layout, presentation, narrative etc, of the advertisement. Evaluation: Before transferring my footage onto VHS I was able to preview it first on the computer to see if I was happy with the final outcome or would there have to be any adjustments made. I enjoyed this project because it gave me the opportunity to learn about the equipment and how to structure a good advertisement. I am keen to develop these skills in future tasks. If I was to repeat this project my advert could have been much better because I know more about the equipment and what the project entails. ...read more.