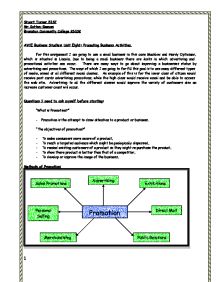 Promoting Business Activities. For this assignment I am going to use a small business in this case Mucklow and Hardy Opticians, which is situated in Lincoln.

Stuart Turner 5167 Mr Sutton-Reeves Branston Community College 26102 AVCE Business Studies: Unit Eight: Promoting Business Activities. For this assignment I am going to use a small business in this case Mucklow and Hardy Opticians, which is situated in Lincoln. Due to being a small business there are limits in which advertising and promotional activites can occur. There are many ways to go about improving a businesses status by advertising and promotions. The ways of which I am going to for fill this goal is to use many different types of media, aimed at all different social classes. An example of this is for the lower class of citizen would receive post cards advertising promotions, while the high class would receive e-mail and be able to access the web site. Advertising to all the different classes would improve the variety of customers also an increase customer count will occur. Questions I need to ask myself before starting: "What is Promotion?" - Promotion is the attempt to draw attention to a product or business. "The objectives of promotion?" - To make consumers more aware of a product, - To reach a targeted audience which might be geologically dispersed, - To remind existing customers of a product so they might re-purchase the product, - To show there product is better than that of a competitor, - To develop or improve the image of the business, Methods of Promotion: Mucklow and Hardy face many constraints one main one being that they have a small advertising budget. So with this small budget the advertising must be a mixture between cheap and efficient. Another main constraint is that Keith Tomlinson is the owner of the company and he decides single handed what the business should do, with little help from outside sources. This hampers the company due to not having a wider range of people and ideas to turn to. Advertising is a major part of the promotion of a product and has been use for many years. ...read more.

This is mainly aimed at larger businesses but some factors do apply to he small business like Mucklow and Hardy. Physical distribution covers the physical movement of products from producers to the eventual selling points. The costs of this are significant and, on average, can accounts of approximately 20% of the unit costs of a product. This is accounted for by: * the costs of distribution facilities, such as storehouses, * stock holding costs, * transport costs, communication costs, * costs of unitisation. Distribution channels are the routes through which products for from the producer to the final customer. These routes maybe simple or complicated. The routes are normally expressed as two types, Short-channel and Long-channel. Short-channel routes: These are routes where the supplier reaches the consumer either directly or through a retailer. Short-channel routes are shown below: Direct supply takes place through mail-order or telephone selling, but the rapidly growing revolution in selling is through the internet. Ecommerce is going to become the norm in the marketing of some goods and increasingly common in others. Short-channel supply through retailers is very common and there is often an interesting balance of power between the producer and the retailer. In some cases, the producer is keen to have products sold through the retailer's outlets. An example of this would be a producer of foodstuffs who would be keen to supply to Marks and Spencer. In other cases, retailers, such as garages, are keen to supply certain products, such as BMW motorcars. The relative power will change with circumstances of the market. In many cases, producers and retailers work together on such matters as funding, design, promotion and staff training. Obviously, it is in the interests of both parties for products to go well. Long-channel routes: These routes where there is an intermediary between the producer and the eventual consumers. Possible long, channel-routes are shown on the following page: Wholesalers have two main functions, those of 'breaking bulk' and stock holding. ...read more.

One main reason for this is that OAP's get government support for health care and such. Also older customers are usually loyal to a company if they supply a good service. Reaching the geographically dispersed customers: Due to creating a web site for Mucklow and Hardy it is easier for those people in geographically dispersed areas, to contact and interact with Mucklow and Hardy. This saves the customers/potential customers from travel to the shop to just to see what they offer. Improving the image of the business: The businesses image has become dated over the last few years with the increase in technology and advertising media. I considered this when starting to improve the existing advertising media, I took into account that a so called 'corporate image' would possible increase the recognition of the business and an attractive yet upmarket image was required. I added an eye watermark to the media and added an attractive yet bold colour scheme, adjusted the format of the media. The colour scheme is the same in the hop so I decided to carry it throughout the campaign. Reminding existing customers of a product so they might re-purchase the product: when the customers next appointment is due an appointment card could be sent though the post along with some leaflets of the product they purchased in the past demonstrating the improvement made what makes them better. This might say to the customer that there glasses or out of fashion, season or would just like the newer version. This could encourage the customer to repurchase, thus creating more sales for the business. The additional media I produced would increase the campaign and would reach a wider audience and increasing awareness allowing more opportunity to attract new customers and in turn increase there market share. The main addition to the campaign was the introduction of a web site. Due to most people have access to the internet in this day and age it is accessible to the majority of people looking for a quality service. 14 1 ...read more.