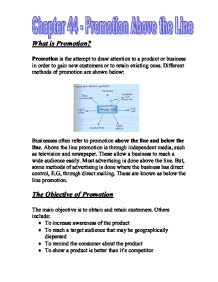 Promotion Above the Line.

What is Promotion? Promotion is the attempt to draw attention to a product or business in order to gain new customers or to retain existing ones. Different methods of promotion are shown below: Businesses often refer to promotion above the line and below the line. Above the line promotion is through independent media, such as television and newspaper. These allow a business to reach a wide audience easily. Most advertising is done above the line. But, some methods of advertising is done where the business has direct control, E.G, through direct mailing. These are known as below the line promotion. The Objective of Promotion The main objective is to obtain and retain customers. Others include: * To increase awareness of the product * To reach a target audience that may be geographically dispersed * To remind the consumer about the product * To show a product is better than it's competitor * To develop or improve the image of a business, rather than a product * To reassure consumer's after the product has been brought * To ...read more.

These are: * Cost - Small firms will be mainly concerned in the type of media in which they can afford. Larger firms will need to consider the cost effectiveness of each of the different media. * The audience reached - Given that many products are aimed at certain segments, it makes sense for firms to place their advertisements in a medium where its target audience is likely to see or hear. * The advertising of competitors- On T.V, for E.G, a advertising may be on to promote a product, then straight after it may be an advertisement from its competitors. * The impact- Firms aim to create the largest impact they can, and to do this it may require different media to do this. * The law- There are legal restrictions in the U.K, so some products cannot be advertised in a particular media. * The marketing mix- The advertising campaign should be integrated with other types of below the lie promotion. ...read more.

* Environmentalists are concerned about high levels of consumption and advertisings role in this. * Advertising can encourage people to buy products which are regarded as being damaging to society. * Advertisement often encourages behavior which might be to the detriment of society as a whole. * Advertisement offers a choice to consumers, which allows them to make more informed consumption decisions. * Advertisement gives valuable information to consumers which might otherwise be difficult to come by. * They respond to the needs, wishes and attitudes of the customers. * Earns revenue for T.V and radio, and allows newspapers and magazines to be sold at lower prices. * The advertising industry employs large numbers of people. Corporate Advertising Corporate advertising is concerned with promoting a company as a whole, rather than individual products. There are two reasons why companies need to sell themselves more than ever. First, companies must now be seen as responsible good 'citizens'. This means communicating. Second, there is a growing pressure for the company to become a brand. Companies need to ensure that their corporate image is positive. Corporate advertising often use slogans or catch lines. ...read more.